The Backyard Flock: Death in Chickenland 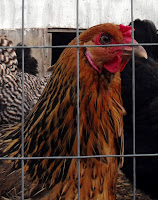 We lost another chicken this week, a young Araucana. She had been kind of logy for a couple days then rallied as they always seem to do just before the end. She died comfortably during the night wrapped in the security of her flock.

We never bothered to name the chicks from the last straight run from a couple years ago and that made it easier to let her go. This is the second one we have lost from that group. Both died with no clear cause. It just happens sometimes.

So, we are down to nine chickens from an all-time high of 13. I imagine we will lose a couple more over the winter, as some of them are quite old for chickens. Pee Wee, our Rhode Island Red of Rocky and Pee Wee fame, is in her seventh year and still going strong. Amy is already talking about getting six more chicks next spring.

Raising the little ones is always a mixed bag of hard work and fun. But, this time around we will have the dog to contend with. I just can’t imagine how that will go. We had grown the last bunch under a heat lamp in the kitchen, where we could keep an eye on them. But, now the kitchen is Suki’s turf. I suggested the garage, but Amy will not hear of it. She has plans to banish Suki from the kitchen. I can hardly wait.
Posted by Virgil Hervey at 10:07 AM