I note with great sadness the passing of Jordis Rhule, today, from brain cancer.

I first met her some five years ago when she was hired as director of the Antioch Writers' Workshop. She was a bright, young, vital mother and freelance writer.

I did not know her well, but I watched her decline from a respectable distance as mutual friends kept me aprised. I saw her not too long ago and thought she had beaten it. Apparently, her recent reoccurrence was sudden and rapid.

My heart goes out to her husband and son.
Posted by Virgil Hervey at 10:46 PM No comments:

I heard this today from reliable sources:

A popular bag boy at a local market was reportedy fired for not responding to the recent emergency brought on by Hurricane Ike. According to my contacts, all the market's employees, but one, showed up to help the owners load refrigerator and frozen goods into a refrigeration truck that had been parked in the lot behind the market to try to save their stock from spoiling due to the power outage. The long-time employee was allegedly terminated for not turning out when he was needed. It is not known what his reasons were for not coming to the store to help out in the emergency, or if he had in fact been asked to do so.

The denizens of the bench in front of the market began to notice that he was not hanging around as usual and inquired of an employee within. Speculation is that the 56 year old man will have difficulty in finding employment and there is great sadness along the bench to nowhere over the situation.

Also from reliable sources: He was scheduled to work that day. When he didn't show up, he was called and asked to come in, but he refused, saying he had better things to do.
Posted by Virgil Hervey at 1:19 PM No comments:

Yellow Springs is a village loaded with artists of all kinds. It probably has more massage therapists per capita than any other town in the country. Spiritual practitioners of every description abound. That is the light side.

Then there is the dark side... It also seems that we have more than our share of sociopaths. Acts of human kindness..? Forget it! Today, I witnessed a vicious, senseless verbal attack unleashed by one woman upon another who had simply greeted her. The woman was still in tears over the incident a good fifteen minutes later.

"I don't appreciate your shouting out my name in public," Psycho Babe said, shouting, herself.

I had been standing just a few feet away and had not heard anyone's name shouted. Therefore, I still do not know Psycho Babe's real name, although I have seen her around. And now I don't want to know it either. I am tempted to say, you know who you are, but I'm sure she doesn't. The verbal assault was just another insignificant part of her miserable everyday existence.
Posted by Virgil Hervey at 12:56 PM 1 comment: 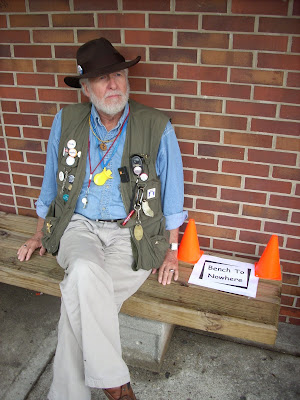 Hockey pop or hockey puck?
Posted by Virgil Hervey at 5:30 PM No comments:

Pros and cons for Mr. Obama in the weeks ahead

Thinking about last night's acceptance speech by John McCain, I have concluded that the issues for Barak Obama boil down to these:

The fact that the surge seems to be working is taking some steam away from Obama's anti-war stance. The Republicans will be hammering away at his opposition to the surge and his attempts to block funding for it. McCain is blunting Obama's call for a change in Washington by pledging bi-partisanship and inviting Dems and independants to work with him. Another factor that might hurt the big O is the sabre-rattling of Vladimir Putin that is bringing us right back into another cold war. I am sure they will point to how Ronald Regan ended the orginal one.

What Obama has to do is keep stressing that the Iraq war, which has claimed the lives of 5,000 American soldiers, was wrong in the first place and had nothing to do with the war on terror. He has to remind the voters that he was against it from the beginning, while McCain was totally on board from the start. Without the war, we would not have needed the surge. He needs to harp on the fact that more soldiers are dying in Afaganistan than ever before, as a result of our inattention to the Taliban due to our preoccupation with Iraq. Perhaps hardest of all, he is going to have to convince the American people that he can stand up to the Russians. One point he can argue is that America should not let Mr. Putin affect our Presidential election.

I think he can effectively counter McCain's claim to bi-partisanship by pointing out that he has chosen as his running mate someone who appeals to the far right of his party on every single issue. If he were truly bi-partisan, he would have chosen Joe Lieberman or a more moderate Republican. He can't have it both ways.

When Sarah Palin points out that she has administrative experience and Obama and Joe Biden do not, they have to point out that McCain has never held an executive position. She can't have it both ways either. Experience is the biggest red herring in this election. No one who has never been President is "experienced." Only an incumbent can claim that. Abraham Lincoln, whose name the Republicans regularly invoke, had no experience. Bill Clinton, was a $35,000-a-year governor of the poorest state in the union. Did that qualify him as experienced enough to be President? He did okay. And whatever gains he made, the Republicans promptly pissed away.

When John McCain tells you that he would rather lose an election than lose a war, what he really means is "lose another war." McCain was a war hero in a losing effort. That has to have stuck in his craw. Vietnam was no more a just war than Iraq. But nobody dares say that, at least not running against John McCain.
Posted by Virgil Hervey at 1:23 PM 3 comments:

A woman - but why this woman?

Sarah Palin has enough problems of her own, without being used by John McCain as a political tool. This is the last I am going to post about her. Susan Reimer of the Baltimore Sun has just summed it up in her column, better than I ever could.

And then there is this.

This one is important.

This one is a must read!