The Backyard Flock: Who is sleeping with whom? 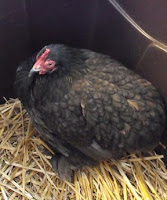 As I write this, there is a sweet, docile, old Blue Cochin bantam I call Sloopy in a box in my kitchen. She is sleeping in the house with us for now. This cold spell we have been having for more than a week has taken its toll on her. And, while I’m sure she prefers the flock to our family, she is responding well to the warmth and has taken some food and water in what I suspect has been the first time for a few days.

Sloopy came to us from one of the wild and crazy flocks that used to roam free at Stutzman’s Nursery. One day she wandered into the area where they kept geese and the bigger, more combative birds took exception to the intrusion. She got beat up pretty bad, according to Nick Ormes who was taking care of the animals there. After Nick healed her wounds, he asked if I would take her in to live among my more civilized flock. Since then, she has been getting along nicely with the other girls. Although, she doesn’t seem to have formed any particular friendship as chickens often do. She seems to prefer keeping to herself. I suspect she is quite old, as she hasn’t laid an egg in two years I have had her. But she’s a lovely old dame with beautiful gray feathers.

Once the weather started getting cold, I noticed that several of the older chickens started sleeping in the coop where the six-month-old pullets have been living. At night they are free to choose from either of two coops and, generally, the older birds had been staying in one and the younger ones in the other, with one exception; there is an old buff Cochin bantam, Molly, that had been getting picked on by her peers. She must have decided she was getting better treatment from the pullets, so she has been sleeping with them since summer.

We have a Leghorn, Whitey, who ends up losing practically all her feathers every fall when she molts. She is a clever little bugger and figured out that she would be warmer with the pullets until she regained her plumage. Once she grew new feathers, she moved back where she belongs with two large Polish hens; Sloopy; a crazy little Mille Fleur bantam, Ginger; Whitey; and Pee Wee, the Rhode Island Red of “Rocky and Pee Wee” fame.

Once it started getting really cold, I noticed that nine of our thirteen hens were sleeping in one coop, and only four in the other. Sloopy and Ginger had moved in with the younger group.

What’s the attraction? Body heat! The six younger birds grew up together and still remember how they used to clump together for warmth when they were chicks. They bonded that way. The other birds are simply looking to get in on the action. Why nine? That is all that will fit on the roost in that coop, which is really more like a loft bed. There isn’t room for one more chicken. I laugh when I go out there with a flashlight to lock them in for the night. Nine pairs of beady eyes follow my every move as I make my head count. And someone usually has something to say.

With the arrival of snow and temperatures in the teens even during the day, I can’t let them out in the morning as I usually do. But I can’t keep nine chickens cooped up in a structure that was really designed for six. So, I have been catching two of them on the days I keep them locked up all day and moving them to the other coop. Thus far, it has been Sloopy and Ginger. They are never happy about it, but they are the easiest to catch. Molly buries herself behind the young ones when she sees me coming. I figure she is better off with them anyway.

Now, with Sloopy in the house, there are seven in one coop and five in the other. I wonder how long Amy is going to let Sloopy sleep with us.

Post script: Two days after I took Sloopy into the house, she had a seizure and died. Her condition seemed to have improved greatly and she had been eating well and moving about. I believe her heart just gave out.
Posted by Virgil Hervey at 12:36 AM

So sorry to hear about that...this cold weather is something else...when is it going to end?