The Backyard Flock: The heartbreak of losing a chicken 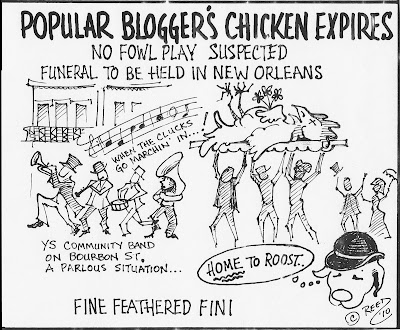 Long before I started this column, I wrote in my blog about losing my favorite chicken. I’m sure this is hard for a lot of people to understand, but that particular Barred Plymouth Rock and I had a history. Her name was Rocky and she was one of the smartest chickens I have ever seen. Rocky was one of only two pullets to come out of the first six chicks we ever bought. We got them at the Caesar’s Creek Flea market and had no idea what we were doing. The other pullet to come out of that run was a Rhode Island Red we called Pee Wee.

Pee Wee is still with us. But, sadly, we lost Rocky in the cold of last winter in a manner very similar to the way we lost the Blue Cochin we called Sloopy, last week. The older chickens don’t seem to handle the cold as well as the younger ones. And it seems that once they have started to succumb, even bringing them into the warmth of your home can’t save them.

Rocky was the smartest and fastest maturing of that first bunch of pullets and cockerels we had some six years ago. Even in the first couple weeks, she was always the first out of the cage when I opened the door. She was the first to fly. When I had them fenced in with a low fence, she would fly in and out at will, while the others stood and clucked at her in amazement.

When she got older, she was clearly at the top of the pecking order. Nobody messed with her, although we rarely saw her attack another chicken. She ruled the roost with the fear of the unknown. None of the other chickens dared test her. She was a big ole gal and a looker, too. I always maintained that if I entered her in a contest at the county fair, she would win hands down.

Chickens seem to have a way of knowing which animals are threats and which aren’t. Groundhogs and squirrels come and go at will and none of the flock takes notice. But, if a neighbor’s cat or a raccoon wanders into the yard, all the heads go up and the warning cries start immediately. We can usually hear the ruckus in the house.

Groundhogs can be tough. One look at their teeth and you know this is not an animal to be messed with. But they are essentially docile herbivores, unless protecting their own turf against another of the same species. I have heard stories about them fighting viciously among themselves. But, I have often seen them dining alongside the chickens. They love chicken feed and will go to great lengths to get to it. I have never been able to keep up with all the groundhog holes under the fence around the chicken run.
The chickens usually ignore them. However, one day Rocky took exception to a groundhog eating at her trough and went after him. After being violently pecked in the head in the surprise attack, the groundhog headed for one of his holes under the fence. I would witness this same scene several more times.

Rocky might have been fearless, but she loved to be handled. She was always gentle with the family. I would pick her up and carry her around like a puppy. I would bring her out front when were gardening and let her eat the bugs and worms we uncovered. Sometimes I would take her over to visit the neighbors who liked chickens. She never objected.

The only time she disappeared on me was one time when a cat that I wasn’t aware of was lurking in the bushes while we were gardening. Rocky very calmly hid and kept quiet until she thought the cat was gone. Then she started cooing softly to me to let me know where she was. She was glad when I found her and picked her up. I always had the feeling that all the chickens felt safer when I responded to trouble in chicken land, such as when a hawk would be hanging around and I would come out there and chase it away.

Rocky wasn’t beyond mischief either. When the chickens were free to roam the backyard, I always had trouble keeping her and Pee Wee off the back deck. Of course, Rocky was the ringleader. The deck, which is attached to the second floor of our house, is accessed from the backyard by a flight of about ten steps. Many were the times I would catch them in the act of climbing the stairs.

The chickens always watch the house. The moment one of us comes out onto the deck through the back door, they get all excited about the prospect of getting a treat, usually leftovers from our latest meal. One day we were in the house when there was a knock on the back door. This seemed strange as the backyard is fenced off and no one ever came to the back before. I went to answer it, but when I looked through the glass, I couldn’t see anyone there. I opened the door and there were Rocky and Pee Wee. They looked at me, then at each other and ran for the steps. They knew they weren’t supposed to be there.

I didn’t have the same kind of history with Sloopy. She was old when we got her and she didn’t care to be handled. She was always the last one out of the coop when I opened up in the morning, the last one to come to get fed. In the afternoons, she would wander off by herself to a shady place under the bushes. She didn’t have any friends. She remained outside the pecking order. She managed to keep her beautiful blue-gray feathers from getting ruffled. The closest I got to knowing her was when I brought her into the house last week to keep her warm. She seemed to appreciate it. And I was happy to be able to do something nice for her, before she left this world.
Posted by Virgil Hervey at 9:12 AM

Rocky is still in our hearts, if not in your yard.