The Backyard Flock: Feed me, Seymour, feed me! 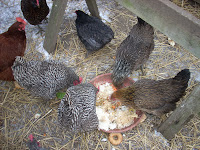 Friends who come over for dinner are often amazed by the kinds of leftovers we save to feed the chickens. Watching us cut up the discarded gristle from a grilled steak into bite-size pieces usually prompts the question: What else do you feed them? The answer is they will eat just about anything. And to illustrate that, we tell the story of the broken glass.

One winter the glass in our outdoor table shattered into tiny shards that landed all over our back deck. I’m not sure how it happened, but it was probably a result of expansion and contraction due to temperature changes or from the weight of accumulated snow after a heavy snowfall. In any event, we cleaned up the deck the best we could, trying not to let the glass slip through the planks and fall in the gravel underneath. The deck is about five feet above ground and the chickens, which were free to roam the backyard in good weather back in those days, loved to hang out under there.

Unfortunately, it was impossible to prevent a good deal of the small pieces from filtering through the cracks and attempts to pick up the broken glass from the gravel were frustrating. Trying to keep the chickens from going under the deck once the weather improved was also fruitless. We fenced it off with chicken wire and cherry netting, but they were relentless in their pursuit of the insects that lived under the big chunks of gravel. They probably won’t eat the glass, we reasoned when we finally gave up.

One day when I was retrieving eggs from the coop, I spotted a small piece of glass in the droppings under their roost. It was all smooth and rounded like the glass we used to find on the beach by the Atlantic Ocean. We used to call it sea glass. In fact, we used to collect sea glass, just like collecting shells. Could it be..? Could this be the refined product of one of those sharp pieces of our picnic table having passed through one of my chicken’s gizzards..? None of my girls seemed any the worse for it. It was probably a coincidence, I thought. But, over the next few days, I began to find more and more sea glass on the floor of the coop.

So now, when I say chickens will eat anything, I usually add: They even eat glass!

But seriously, we usually feed them the leftovers from just about anything we eat, along with their normal diet of fortified chicken feed and cracked corn. Their favorite, I would have to say, is spaghetti (with tomato sauce). They slurp the pieces down, just like I have seen them do with a nice fat, juicy worm. They also like just about any kind of meat, fat and gristle. Lately, ham seems to be in favor. They definitely like salty things. Rice is the most common leftover we have in our household. You would think rice would be ideal for chickens – and it is – but they are lukewarm to it, unless we put soy sauce on it. Then they gobble it up.

Among the things we have given them are: Shrimp, crab, crawfish, clam and oyster shells; all kinds of bread, noodles, pasta and rice: pork, ham, steak, and any other kind of meat, exclusive of poultry; fish (bones included); potatoes and sweet potatoes; carrots, corn, and tomatoes, fruits and green vegetables; and deserts, including pie, cake and doughnuts. They love all kinds of sauce on their food – the spicier, the better. Food items that are high in calcium are especially good for the egg laying process.

Just about the only thing we won’t give them is chicken. Somehow that offends our sensibilities. Cannibals..? Not our girls.

When they had the run of the backyard, they would raid the vegetable garden. They had an uncanny sense for when things would be ripe. If I saw a tomato that was just about ready for picking, but decided to wait one more day, they would get it before I would. I have seen them working together in an uncharacteristic show of cooperation bending and holding down a cornstalk to get at an ear of corn. Melons and zucchini are also favorite garden raid booty.

Sometimes I serve them their food in the containers I carry it to them in. I leave a big platter out in the chicken run where I often dump leftovers. When they see me coming with food, they flock around my feet and follow me to the dumping ground. Every now-and-then one of them will jump up and snatch food off the plate, before I get a chance to serve it up. If I bring something out in a Styrofoam container, I have to be careful to remember to bring it back with me. If I leave it behind, they will eat that, too! And I have never seen any ill effects from it. But, I hear it’s very filling.

(Photo by Matthew Hervey)
Posted by Virgil Hervey at 11:11 AM

Maybe you can make jewelry out of the chickens' "sea glass" ... how about "gizzard glass?"