The Backyard Flock: Therapy or penance..? 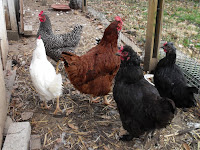 Sometimes I wonder why I raise chickens. Sure, it’s fun. And there is a theory that having pets is therapeutic. But on frigid winter mornings when I have to go out to Chickenland and feed them and bring them hot water, when I have to go out there every single night and take a head count and lock them up, when I have to shovel out their filthy coops and refill them with fresh straw, I think there may be some deep-seated psychological reason for torturing myself so. I can’t be doing it just for the eggs. If you add up all my expenses, these have to be the most expensive eggs in the world.

Back in the early to mid sixties, I served four years in the U.S. Coast Guard between my sophomore and junior years at Colby College in Waterville, Maine. When I returned to school as a married student, I had to find a decent off-campus apartment. Once I did, I wasn’t about to give it up for the summer. So I stayed in Maine and worked for the summer between my junior and senior years.

Without any local connections, finding a summer job in the Waterville area was quite difficult. Finally, I got hired at the Ralston Purina chicken processing plant across the Kennebec River in the city of Winslow. Prior to that, my only reasons for ever going to Winslow were a half-decent pizza place and the Winslow Drive-In Theater, which just happened to be right next door to the chicken processing plant.

My job at the chicken plant was to unload crates of live chickens from the trucks that would bring them in from farms all over the area. It was hot, dirty work at just barely over minimum wage and I rarely worked less than ten hours-a-day, sending thousands of young chickens off to their deaths. Instead of pitying the poor birds, I came to despise them with my every waking breath. I used to say that chickens could hit a target through the bars of the crates at a range of ten feet. When I returned home at night covered in chicken shit, I would remove my shoes and clothes in the basement and shower immediately. There finally came a time when I stopped eating chicken, even though I could purchase it at the plant at a decent discount. I loathed them that much. After about a year, however, I got over my aversion to chicken and, to this day, it remains one of my favorite foods, especially the feet.

Fast forward forty-something years and here I am in Ohio raising chickens as pets. Or, should I call it catering to their every need. If you have followed this column, I am sure it is clear to you how I have come to love and admire these strange birds. Losing just one to a hawk or a raccoon is a tragedy.

A couple of notes:

(1) A woman came up to me during a break at community band rehearsal a couple weeks ago and asked me where I get my chicken feed. I thought she said “chicken feet.” So I said, something stupid like, “Why do you ask, are some of my chickens missing feet?” Then I went on to tell her that usually we get them in Columbus or Cincinnati, chicken feet being one of my favorite dim sum items. But we usually eat them in a restaurant, as opposed to preparing them ourselves. I was thoroughly embarrassed when I finally realized that she meant chicken feed. I get it at Tractor Supply in Beavercreek. She wanted to know, because she had heard that it makes effective and inexpensive kitty litter.

(2) Every now-and-then a chicken would get loose at the chicken plant and it would be my job to catch it. Those I couldn’t catch would flee into the drive-in theater next door. Whenever we went to the movies, it felt like I couldn’t escape my work. I would have one eye on the screen and the other out the driver’s side window.
Posted by Virgil Hervey at 9:10 AM