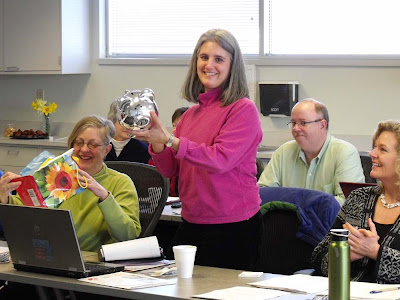 Mary Fisher accepts the silver piggy bank, symbolic of the chair of the Development Committee, from outgoing chair Staffan Erickson.
The Yellow Springs Community Foundation held its annual meeting Saturday, March 26 at YSI. Trustees, members and community committee members were in attendance to elect new trustees and witness the appointment of members. Trustee and long time Grants Review Committee member Orlando Brown retired in December and Staffan Erickson completed two five-year terms as a trustee and chair of the Development Committee. They were replaced by Mary Fisher and Sterling Wiggins who were elected at the meeting. Ellis Jacobs and Chris Kristensen were appointed to the YSCF membership. Fisher also took over as chair of the Development Committee where she had been serving as a member.

YSCF President Bruce Bradtmiller brought the group up to date on the new Miller Fellowship program made possible by and endowment funded by a bequest from Dick and Nolan Miller.