“This was extremely exciting for all of us,” said Durrani, exhausted but happy with his team’s performance after they returned last weekend. Over 700 children from all over the Midwest participated in the event. “There were teams competing from schools that take 40 kids and easily have 5-10 kids in one age bracket. We didn’t have that. The YS team consisted of one second grader, four third graders, four fourth graders, two fifth graders, one sixth grader, and one seventh grader.”

This was the first time any of Durrani’s Yellow Springs students had been to a chess tournament.

“My Yellow Springs Kings really shined in this competition,” he said.

Durrani said the excitement ran high from the beginning, starting at the hotel where parent chaperones John Spar and Ellen Marie Lauricella, and the YS Chess Kings stayed Friday night in preparation for the 6:30 wake-up call, team breakfast, and 9 a.m. start time. “I am so appreciative of John and Ellen for all their time and effort with this project,” said Durrani. “I couldn’t have done it without them.”

After arriving at the clubroom in the Bengals Stadium and meeting up with two of Durrani’s Cincinnati chess students, each child was assigned their opponent and table. Coach Durrani and John Spar were allowed to escort the kids to their individual table only during the first and second rounds of the five-round competition. “They were very excited and ready to play,” Durrani said. “I told them, ‘be patient, be calm, play a good game,’ It was incredibly thrilling to talk to the kids at that time. They were very focused. I told them to just remember all the hours they put into training and just let that come to their mind and not let the nerves and excitement of tournament affect their ability.”

“I had to really stop our level of excitement early on,” said Durrani, “amongst the parents as well as the children because the children were feeding off of this energy. I didn’t want the kids to dwell on it. For the rest of the day, I was maintaining a level of neutrality. I knew we had two more games to play. Being in third place midway through the day doesn’t mean anything if we end up losing games. We’re not here to get a trophy. I reminded the kids all through the day—‘Why do we play chess? Because it’s fun.’”

Durrani said the day was an emotional roller coaster. “There were some tears of disappointment along with the cheers, but I made sure to nurture every one of my students. They would be at their highest high when they played a game and then it was really hard when they would lose.” 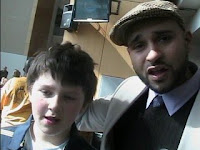 “My one and only seventh grader was in the bracket of 7th through 9th graders. He was in the beginning of a very difficult bracket, playing against high schoolers. He had the most difficult time. I’m proud of his determination. His level of excitement was very contagious.” Friday night, after everyone else was asleep, Crawford and Sulayman Chappelle even snuck in an extra practice game.

“I couldn’t be upset,” said Durrani about discovering the after-curfew game. “It showed me how much they love chess. But I had to stop the game and insist they go to bed.”

The day ended with an awards ceremony. Upon the completion of five games, each child received a medal for participation. The children that had 3.5 wins and above received a trophy. Mister Omar’s Chess Academy took home four individual trophies and two team trophies.

Tyresse Benning was the anchor man on the fourth grade team. “I had two top players on my fourth grade team going in,” said Durrani, “and Tyresse was one, 4-1, leading the team to a second place finish overall.” Second grader Ivan Spar was 4-1 in his play for the day and Zenya Miyazaki was 4-1 anchoring the third grade team to fourth place.

“I had one student, who went undefeated in his tournament play,” Durrani continued. “Samuel Green, the YS Kings captain, finished 5-0 and placed individually second amongst all the other sixth graders that played. The play of Zenya and Tyresse allowed our third and fourth grade teams to place. They were a pivotal part of our success.”

Durrani would like to thank all of the villagers and businesses who contributed to the Chess Academy to make the trip possible including The Emporium, Tom’s Market, Unfinished Creations, Sunrise Café, Dunphy Real Estate, and Bob Baldwin. He would also like to thank the parents that came to the tournament to support the team and to all the Cincinnati and Yellow Springs parents for their commitment to their children and to Mister Omar’s Chess Academy.

“This was a team effort and a force to be reckoned with,” said Durrani.


For more information about Mister Omar’s Chess Academy, go to www.MisterOmar.com. If you have pictures from the event, please send them to Durrani at durranio11@gmail.com for posting.

Submitted video edited by Susan Gartner
Posted by Virgil Hervey at 9:06 AM

Congratulations to everyone!
Jane Scott

Congratulations to the chess players. You are awesome!