"The People Speak" at Little Art 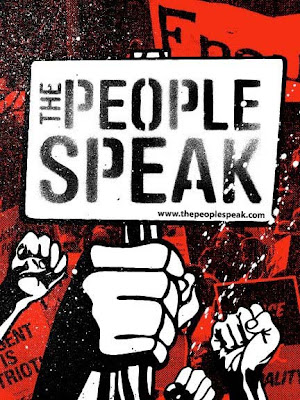 On Sunday, April 3 at 3:00 p.m. the Little Art Theatre will present a free screening of the documentary movie “The People Speak,” featuring a special Q&A session with the film’s co-producer Chris Moore.

"The People Speak" is a beautiful and moving film inspired by Howard Zinn’s book, A People’s History of the United States. Zinn is the narrator.

Using dramatic and musical performances, the production gives voice to those who spoke up for social change, equality and justice. Hear the words of those who forged a nation from the bottom up.

From Jenny at the Little Art:

Admission to see this wonderful film is FREE thanks to Ken and Margo Bode.

From the Box Office Window:

“From the moment that we had any kind of influence in this town, we were trying to get this project off the ground.” - Matt Damon

The People Speak is a beautiful and moving film inspired by Howard Zinn’s books “A People’s History of the United States”-first published in 1980 and one of the bestselling history books in the United States-and, with Anthony Arnove, “Voices of a People’s History of the United States.” Using dramatic and musical performances of the letters, diaries and speeches of everyday people, the documentary feature film THE PEOPLE SPEAK gives voice to those who spoke up for social change throughout U.S. history, forging a nation from the bottom up with their insistence on equality and justice. Narrated by acclaimed historian Howard Zinn and based on his best-selling books, THE PEOPLE SPEAK illustrates the relevance of these passionate historical moments to our society today and reminds us never to take liberty for granted. 113 minutes. Not Rated.

CHRIS MOORE (Producer) co-directed and executive produced the Howard Zinn documentary The People Speak. His filmography includes the highly successful series of American Pie films, Reindeer Games, Joyride, the documentary Pop and Me and the Academy Award®-winning Good Will Hunting. Chris was co-creator of HBO’s Project Greenlight. In 2008, he directed his first feature film, Kill Theory. Most recently, he produced The Adjustment Bureau staring Matt Damon. Moore received a BA in American History from Harvard University.

“Striking, exhilarating... the performances are thrilling.”—Los Angeles Times
“The documentary... works beautifully... Each passionate reading flows out of the previous one.”—Boston Globe

“So much of Mr. Zinn’s career, reflected in his “People’s History of the United States” book, has been about the struggle for social change... Some of the readings, like Ms. Tomei’s, are especially resonant now, given the perceptible anger in the country about banks and bailouts. “That’s by design,” Mr. Damon said. “What they were up against oftentimes are exactly the same things we’re up against now.”—New York Times

“This is the perfect format for a history lesson. You’re getting the actual historical text verbatim, so there’s no spin, performed by these great actors. You’re seeing actors read these incredibly dramatic passages in the history of our country, so it’s not at all about, ‘Oh, it’s Sean Penn reading this,’ “ Damon says. “It’s more like, ‘Wow, this is Kevin Tillman talking.’ Or it’s David Strathairn, but he’s now John Brown. These are all speeches and letters and diary entries and things that were actually said by regular people. That’s what’s so moving about it. History is intimidating. There’s so much to know. If I could go back to college again, I would be a history major. I think it’s important for all of us to learn at a young age that there are different perspectives on the same event.” —Matt Damon.
Posted by Virgil Hervey at 10:12 AM