Documentary on Rape in the Military 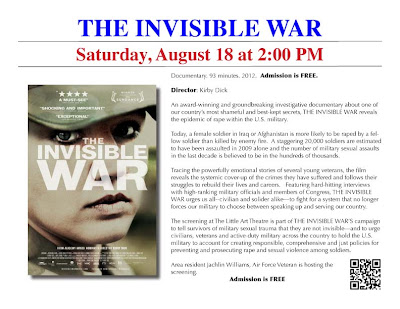 
Jachlin Williams, Air Force Veteran will be hosting one screening of the new, award-winning documentary THE INVISIBLE WAR at The Little Art Theatre on August 18th, 2012. Admission is free.

A groundbreaking investigative documentary about one of our country’s most shameful and best-kept secrets, THE INVISIBLE WAR reveals the epidemic of rape within the U.S. military.

Today, a female soldier in Iraq or Afghanistan is more likely to be raped by a fellow soldier than killed by enemy fire.  A staggering 20,000 soldiers are estimated to have been assaulted in 2009 alone and the number of military sexual assaults in the last decade is believed to be in the hundreds of thousands.

Tracing the powerfully emotional stories of several young veterans, the film reveals the systemic cover-up of the crimes they have suffered and follows their struggles to rebuild their lives and careers.   Featuring hard-hitting interviews with high-ranking military officials and members of Congress, THE INVISIBLE WAR urges us all--civilian and solider alike—to fight for a system that no longer forces our military to choose between speaking up and serving our country.

The screening at The Little Art Theatre is part of THE INVISIBLE WAR’S campaign to tell survivors of military sexual trauma that they are not invisible—and to urge civilians, veterans and active-duty military across the country to hold the U.S. military to account for creating responsible, comprehensive and just policies for preventing and prosecuting rape and sexual violence among soldiers.

“I truly recognize the importance of supporting survivors of military sexual trauma.  My goal as a military sexual assault survivor is to bring awareness to the Yellow Springs area that this disgraceful behavior is unacceptable and we all must fight to stop it from occurring to ANY male or female that serves our country.  This is my personal mission.”—Jackie Williams

Admission:  Free – Limited seating available (First come, first served)
This event is open to the public.
Posted by Virgil Hervey at 8:00 AM