Blake and Cooley to read at coffeehouse

Local writers Aurelia Blake and Kai Cooley will read from their work at the Spirited Goat Coffeehouse on Monday, August 13 at 6:00 p.m. 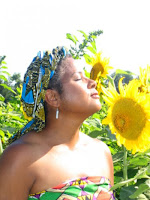 Aurelia Blake has taught in the Yellow Springs schools since 1996 and has coached Power of the Pen since 2000. She has recently returned from her second trip to Rwanda where she is working to establish a creative writing program in the schools. She loves the sun, sunflowers, and Africa.

Kai Cooley grew up in the hills of Southern Ohio with the 10,000-acre Edge of Appalachia Preserve as her backyard. She is an Antioch alumna and was part of a Zen writing group for nearly a decade. She loves cats, wildflowers, bird  calls, dirt roads, and cooking without a recipe.
Posted by Virgil Hervey at 9:28 AM