Artist to sleep in gallery 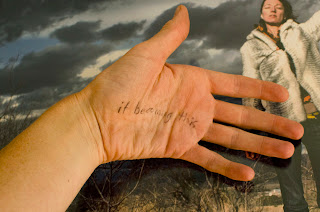 Antioch College is pleased to announce the opening of If Becoming This, a collection of photographs and video by artist Sheilah Wilson. The exhibition is a part of Wilson’s photography series, You are My Favorite Photograph, and will run from August 31 through November 16, in the Herndon Gallery, South Hall. An opening reception will be held on Thursday, August 30, from 7:00 to 9:00 p.m., with an artist talk at 7:30 p.m.

Wilson is a collector of memories and stories. Influenced by the spiritualist movement of the late nineteenth and early twentieth centuries, she acts as a medium in her artistic work, seeking contact with otherworldly dimensions and creating documents of that experience.  She is looking to make the unseen seen, the invisible visible, by using herself as what she calls a “memory translation machine.”

“In my work I am consistently interested in the possibility of the act of translation through the body,” Wilson said. “I use photography, video, and text as performative and documentary tools for my various attempts to pick through the seams of narrative and image.”

Wilson approaches making photographs as a performance, using her body in direct contact with photographic materials to translate stories into visible marks.  For her series, You are My Favorite Photograph, she sleeps over a written description of a submitted memory and a roll of color film. The film is processed, scanned, and digitally printed, which reveals the marks of her body, random light strikes, and other mysterious color traces.

Wilson will be creating a performance piece in the Herndon Gallery at the opening reception. She will be sleeping later that evening in a bedroom installed in the gallery, and will create a piece for her series, You are My Favorite Photograph, which will then become a part of the exhibition.

Wilson is a Canadian-born artist who is currently an assistant professor of photography and new media at Denison College in Granville, Ohio. She has been the recipient of numerous awards in the U.S. and Canada, including the CBC Aural Recall (2003), Nova Scotia Talent Trust (2004), Creative Capital Workshop (2006), Judy Chicago Through the Flower “Feminists Under 40” award (2008), and Canada Council Travel Grant (2009). She shows her work both nationally and internationally. You can see her work at www.sheilahwilson.com.
Posted by Virgil Hervey at 8:19 AM