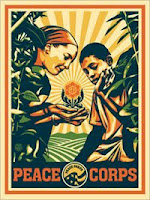 To commemorate the 50th Anniversary of the Peace Corps, WYSO will present the hourlong radio documentary, “Kennedy and the Peace Corps: Idealism on the Ground” on
Sunday, August 28th.

This radio documentary tells the story of how John F. Kennedy's challenge to college
students became the Peace Corps. Those students and former Kennedy administration
officials tell the story of the beginning of the Peace Corps, including getting Congress on board and keeping the CIA out.

“Kennedy and the Peace Corps: Idealism on the Ground” features Dr. Alan E. Guskin,
Distinguished Professor of Higher Education in Antioch University’s Leadership and Change Ph.D. Program. Guskin was a doctoral candidate at the University of Michigan when Kennedy visited the Ann Arbor campus where Guskin was involved with a student group, which is widely credited with inspiring Kennedy to establish the Peace Corps.

On August 28th, 1961 President Kennedy held a ceremony at the White House Rose Garden to honor the first groups of Peace Corps volunteers setting out for service projects in Ghana and present-day Tanzania. Fifty years later, WYSO presents “Kennedy and the Peace Corps” on August 28th, 2011. Produced by Lester Graham of Michigan Radio, Kennedy and the Peace Corps” will air locally on Sunday, August 28th at 6:00 and 11:00 PM on WYSO 91.3 FM and streaming live on www.wyso.org.

Commemorative art by Shepard Fairy
www.peacecorps.gov
Posted by Virgil Hervey at 10:26 AM