Irish music at the Opera House 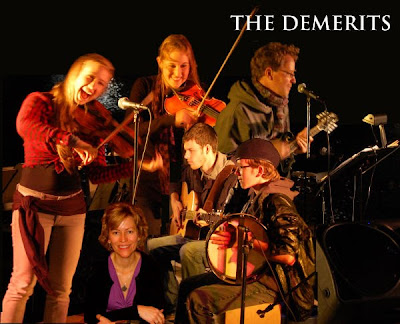 There's going to be some high stepping Irish Americana at the Clifton Opera House on Friday, November 12th at 7:30pm. This Cedarville based group called The Demerits are happiest when tossing off a set of lilting jigs, blazing reels, and bluegrass tunes for anyone who will listen.

Formed in 2003 on the campus of Cedarville University in Ohio as an emergency measure to appease angry crowds demanding traditional Irish music, The Demerits have since gone on to record six very reliable CDs: Plays Well With Others, Roadtrip, Not Far from the Tree, Made from Scratch, Dance by the Light of the Moon, and One Two Three Go. They have performed in a few different places, none of which was very prestigious, but all of which were a good deal of fun.

The group members are mostly fugitives from classical music. After hearing them rip through a rowdy Irish dance set you might not guess that they also have perfectly respectable lives in a little college town. They play Irish and American roots music, which is cool in itself, but what makes them kind of different is that the traditional tunes are intricately arranged with harmonic and rhythmic complexity that draws on the polyphony of Bach.

Recently they have begun to acquire a reputation in Ireland. What happened was, this one lady got their CD and sent it to her daughter who was staying in Ireland, and the daughter called the mom and said the music was good. Technically that is an international reputation if you think about it.

So you can see that things are really picking up for The DeMerits!