The Other Shoe: The Coots ride again

And so here we are... sitting around a table at the Presby church, reading lines. Ron Siemer is pleased as punch (Wasn't another Ron fond of that expression..?) that the Coots are at it again. This is our fourth play - third as a part of the annual Yellow Springs 10-Minute Play festival. This time around, we are delving into existentialism, in our own bungling way, of course. This one's is going to be deep and funny, and more than a bit self-referential. Hey we're entitled - we're old...

The title of the play is "Coots." And in a theater-of-the-absurd kinda twist, the Coots will be playing themselves. The Coots are Walter Rhodes, Ron Siemer and Jerry Buck. Gary Reimers is joining us for a second time. He will be playing me (the writer). I've probably already given too much away. So I'll stop about "Coots" for awhile.

We have eight plays lined up for this year's festival. In addition to my play, we have two by former resident, Prof. Jerry Holt, "Ledge" and "Train Stop." I have seen videos of these two from when they were performed in Michigan City, IN and they live up to Jerry's high standards. "Ledge" is guaranteed to draw belly-laughs. Marcia Nowik will step out onto the ledge as the female lead in that one and direct "Train Stop."


Aaron Saari has given us "Do Adults Make Out in Yellow Springs?" a two-person play in which he will act and direct. His wife, Miriam (Eckenrode), will play the female role. Aaron was last seen in the Center Stage production of "The Crucible," and I gotta tell ya, he scared the bejeebers out of me in that one. Miriam is a regular on stage around town.

Jerry Boswell, long time director at the old Center Stage and participant in last-year's festival, has given us "We'll Be Right Back" a play that contrasts 1950's television with today's fare. Jerry is an old pro. The back-up play for this slot is by WYSO's Jerry Kenny. His play was accepted into last year's festival, but was never produced.


Kayla Graham, who acted in just about every play in last year's lineup, has submitted a script of her own, "Memory Play: Construction." She will also act and direct and is currently looking for someone to take on the male role. Kayla also knocked me out in "The Crucible."

"Whither Thou Ghost" is Lee Huntington's entry. Lee, a long-time writer, dipped her toes into theater last year when she acted in my "Bench to Nowhere." After that she was seen again in "The Crucible" and has finally given us a play - a funny one involving a GPS navigator. If you have one of these gadgets, you've got to catch this play. She will also direct.

Kay Reimers, who writes funny, short plays and serious, long, historical plays, is combining genres to give us "Post Office" a play about the mural in the Yellow Springs Post Office. Leave it to Kay to find inspiration in the history behind the WPA project that brought the artist that painted it to town.

Performances will be at 8:00 p.m. on Friday and Saturday, October 25 & 26 at the First Presbyterian Church of Yellow Springs. If the first two 10-Minute Play Festivals are any indication, this is going to be a great time.

Posted by Virgil Hervey at 10:05 AM No comments: 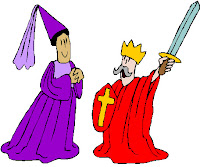 There will be a casting call and organizational meeting for the 10-Minute Play Festival at the Presbyterian Church on Wednesday, Sept. 25 at 7 pm.

We have eight plays scheduled to be produced and need local actors and directors for three of them.

The festival is scheduled to take place on Friday & Saturday, October 25 & 26. There will be a dress rehearsal on Oct. 24. For more information, email gunchpress@yahoo.com.

The 10-minute Play Festival is a production of Centre Stage, community theater in Yellow Springs.
Posted by Virgil Hervey at 12:10 PM No comments:

The Other Shoe: Upon waking up this morning

A guy who's a lot smarter than I, a physicist researching wormholes and other cosmic anomalies, announced last week that time travel is in deed possible. But, only to the future. Funny, I would have thought it would be the other way around.

I got up this morning to the sound of my dog rolling around on the bedroom floor, loosening up her bowels. I had overslept by a few minutes, so I had to alter my routine and take her out before taking care of the chickens. I walked her, fed and watered the flock, did the same for the house birds and made coffee for Amy, before she left for work. Except for some variation in the order of my usual routine, this morning, so far, has been like any other morning. I feel about the same as I did yesterday.

I look at the day ahead and think about the stuff I have to do. I took it easy the last couple days, so things have piled up a bit. But tomorrow looks like a better day to get out the shovel and attack the heap.

Lately, I've been thinking a lot about the past. I figure I've made a mistake just about every place I could have made one in my life. And yet, here I am at a place, where, if I don't look back, I can say I'm pretty happy with the way things have turned out. I guess you could call me a faulty pragmatist or a deluded optimist. I haven't lived up to my so-called potential, but I never really wanted to. I've functioned like a river, flowing sluggishly through the course of least resistance without ever overflowing my banks.

They say you can't go back. I'm not sure I would, if I could.

I look at all those greedy sons-of-bitches who never feel like they have robbed us enough and know they could never understand that my backyard is my beach in the Caribbean and my back deck is my yacht. When it gets cold at night, I put another log on the fire. My satisfaction comes from knowing I don't have to strive to out-do the other guy. I live in the here-and-now, and the things the one-percenter's care about matter not to me.

Today, I have achieved the age of 69 - without them taking everything. Maybe I'll go fishing this afternoon...

-vh
Posted by Virgil Hervey at 9:09 AM No comments:

Labels: The Other Shoe

The Other Shoe: Back Story being replaced

We are all - and I don't care who you are - waiting for the other shoe to drop. For some of us, it could be a different shoe every day. For others, there might only be one shoe, the final one. In either case, we are waiting for it - every day.

It might be manifest in the hesitation to open the mailbox, or in putting off that visit to the doctor's office for your annual physical. It's like the origin of the euphemism, you can't sleep because you know it's coming. You can insure for the loss, but you can't ensure that it won't happen. I guess it's just the determinist in me that's talking this way. Amy would tell you, "It's in the book." That's some kind of Buddhist thing that she's always telling me.

So, it was inevitable that someday I was going to lose interest in maintaining this blog in its community notices format and just stick to the personal observations (mostly of dogs and chickens). I see others around town who are burning themselves out as Yellow Springs Village cheerleaders. They just don't know it yet. Or to put it another way, the other shoe hasn't yet dropped. Personally, I'm on the verge of becoming a recluse and the next steps with the blog are probably interim.

In any event, the title "Back Story" for my musings seemed to fit better when I was an ersatz news source. It no longer seems appropriate. So, as I continue my ramblings, waiting for you-know-what, I think I'll go with "The Other Shoe."

We got a new TV a few weeks ago. The old one lost it's picture and the estimate to repair it was almost exactly the same as the cost to replace it. I'm pretty low-tech when it comes to television. I like a big screen, but 1080p LEDs are lost on me. I just have to be able to crank up the volume to where I can hear Patrick Jane talk in whispered tones about his nemesis, Red John. So I'm still behind the curve, where I am always comfortable.

I've written in the past about how my dog is an avid fan of television, especially dog food ads. She thinks the screen is really a window, and that every thing dangerous portrayed thereupon is about to leap into our living room. I was hoping there would be something about the new TV that would change all that. But, unfortunately, that was not in the book. Now, she seems to be barking at more than just animals, children and evil looking people. She's barking at almost everything. Fortunately, her bed time is nine o'clock. Just about the time the good stuff comes on.

I read something recently that made sense to me about how to stop your dog from barking. The thing is to show them that there is nothing to be afraid of. So, shortly after we got the new set, I picked her up as she was barking at a prolonged display of dogs running around in a yard and carried her over to the TV. I put her nose about six inches from the screen and, in a soothing tone, explained to her that these dogs were not real and could do us no harm. She seemed to buy it, as she stopped barking immediately, and remained calm even after I put her back on the floor.

The dog weighs 45 pounds. My back isn't what it used to be - in fact, it never was. I had no idea how many times I would have to do this. But, the dog had other ideas, anyway. The next time I tried to pick her up during a fit of barking, she dodged me like RGIII and continued hurling abuse at the images on the screen as she ran around the living room, successfully evading my open arms. Once she gets under the dining room table, all hope is lost.

Why do you keep such an animal? you ask... We were in New York for a few days last week. All I could think about was how much I missed my dog. I couldn't wait to get home. And I wasn't disappointed with the greeting I got when I opened the door. She came flying down the stairs to meet me and threw herself at me with all her strength, her sheer joy expressed through a bodily motion that is almost impossible to describe. Tail wagging dog? That's about as close as I can get.

Kalson was in charge of Suki while we were gone. He and his girlfriend walked her every night on something close to our usual route.

"What's with this dog?" he said when we returned. "Everybody knows her name."

"Well, of course," I said, "she's probably the most famous dog in Yellow Springs."