Back Story: Granddog vs. Groundhog Part 2 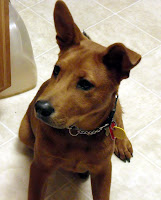 Granddog was over the other day. We had him on Sunday because Amy had a meeting at UD and I was going to drive here there and wait for her. The last time we did that, we were dog sitting, so we brought the dog along and I walked him around the campus. He seemed to enjoy doing that, so we asked if we could bring him along with us for a reprise. Then we asked to borrow him again during the week, since we had to be in Fairborn and May was going to be stopping by our house that night, anyway. As I wrote earlier, pet-wise, this is the best of both worlds.

At some point, I was downstairs in my home office when Amy called down to me that the groundhog was in the backyard and would I let the dog out to chase him. After what happened last time (me pulling a very eager dog off a very scared young groundhog), I didn’t think this was such a good idea. But, I went up to the kitchen to look out the back door. I thought that, if the groundhog were inside the confines of the Chickenland fence, we could let the dog out just to give the groundhog a good scare.

Well, he wasn’t in Chickenland, and he wasn’t a small animal like the last time. But, he was more than two-thirds of the way to the escape route under the back fence. So I decided to let the dog out. With that kind of a head start, I was sure he would get away and, perhaps, never return. But for some reason, as the dog scampered down the stairs from our back deck, the groundhog failed to perceive the danger and was slow to respond.

His reaction was to turn and slowly lope towards the fence, and not even to that part of it where the escape tunnel is located. Needless to say, Granddog grabbed him before he got away and I had to run out there and pull him off yet another groundhog. There is a danger in this, as the groundhog is not likely to appreciate that I am its rescuer, and may very well end up biting me. Have you ever seen groundhog’s teeth?

Fortunately, this time Granddog cooperated better than the last time, when I had to carry him struggling all the way into the house.

It looks like we are going to have him for about a week over Thanksgiving. This will be the true test of whether we should get a dog of our own. We miss him a lot when he is not with us and both Amy and I have been alternately longing for a dog and swearing that we will never get one. In tune with all this, we went over to see Roscoe the other day. Roscoe is up for private adoption, as seen on the Blog and a poster on the bulletin board downtown by Mr. Fub’s.

Roscoe is some dog! He is so smart that he listens to every word of human conversation and if the word “sit” happens to come out, his butt will suddenly hit the floor. He reacts immediately to all the usual commands, except maybe “heel!” I have never seen a dog respond so fast. We fell in love with him as soon as we saw him, but the problem for us is our chickens and our house birds. Granddog likes to scatter the chickens from the other side of the fence, but they are getting used to each other. I’m pretty sure he could be trained not to do that, because, in just a short time, we have taught him to ignore our parrots. But, as smart as Roscoe is, I don’t think he can share a home with another pet, except another dog. Be that as it may, Roscoe’s name keeps coming up around our house.

I have visions of Granddog, Roscoe and the groundhog someday cavorting together in our backyard.
Posted by Virgil Hervey at 10:20 AM

Don't tell me he tried to kill Allen Street Al. That groundhog is a local legend. Bad, dog, bad!