Buy local: But what is local? 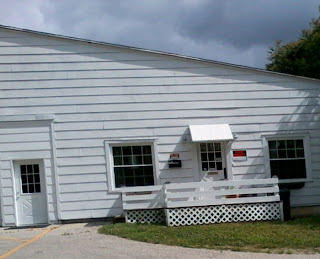 Empty building with "for rent" sign on Cliff Street.

Every time I called the Yellow Springs number for Southtown Heating, Cooling, Electrical and Plumbing, there would be a short delay before the phone would ring through. After a couple times, I began to suspect that the number was being call-forwarded to another location. You might remember when they moved into Yellow Springs a few years ago and set up shop on Cliff Street. Great, another local plumbing option! Not really... The 2011-2012 Redbook has them listed at 108 Cliff Street; the latest edition has them at 3024 Springboro West, Dayton.

Here's the thing about the plumbing business: Local is important not just from an economy point of view. When a plumber starts a job in your house and suddenly finds that he has to go back to the shop for a part, you are most likely going to be billed for his time. If your plumber is right here in town and will be back in ten or fifteen minutes, that's not such a big deal. But what happens when your plumber's shop is in Dayton? He's going to go shopping, and if what he needs is too sophisticated for the local hardware store, he's going to be headed to a Lowe's somewhere on your dime. That's what happened to me recently, when I hired Southtown to do a couple simple jobs that ended up costing me 400 bucks.

When we needed to replace our central air unit recently, I called Southtown and AC Service for estimates. Southtown came in with the best price and the guy who came to the house to do the estimate impressed me. We went with them and the job they did seems to be up to par. So when I needed a couple drippy faucets fixed (kitchen sink and shower), I called them again. It ended up costing me $400. Some of it was justified, as there was one unique problem, but some of it seemed overboard. I thought it should have cost about $200 including parts. Much of it was for time spent while the plumber shopped in two different Lowe's, looking for parts.

Naturally, when you get screwed over like that, you can expect nothing good to come out of it. Sure enough, the work they did on my shower went bad. I called and said that for 400 bucks I expected they would fix the problem without any additional charge, and got a vague answer having to do with whether it was their fault or not. The guy came, left to get a part and I didn't see him again for two weeks. I called a few times and they kept telling me he would be back in a day or two. Nothing... I called on Friday of last week and they said they would pull my paperwork and get right back to me. Two hours later, I called back and got the same response. Nothing until Monday, when I called again and, after waiting for another call back, they finally arranged to send the plumber back to finish the job. I was without my upstairs shower for two weeks! This never would have happened if they had been truly local.

Buy local? It's especially important when you are dealing with the trades. And, if you are not familiar with a business, check them out. Make sure they are really local.