WYSO on reduced power after storm 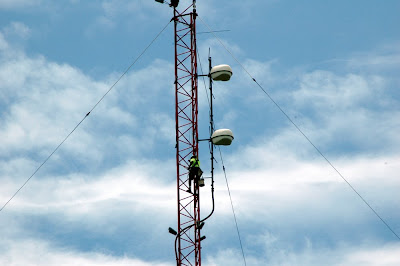 A temporary antenna was installed on the WYSO tower on Clifton Road south of Yellow Springs, on Wednesday afternoon, July 13, replacing one that was destroyed by a direct lightning strike early Tuesday morning.

WYSO is operating at reduced power until a permanent antenna can be constructed and installed.

The WYSO studios on East South College Street were struck a few hours before the antenna was struck. WYSO chief engineer Jim Stitt says that strike is harder to pinpoint. In the driveway outside the WYSO studios, a one hundred foot tower apparently induced voltage from a lightning strike around 9:15 pm on Monday. Stitt says the tower need not have taken a direct hit in order to induce enough voltage to destroy electronic equipment inside the building.

“A lightning bolt can carry a million volts,” he said, “and there’s no way to protect against that.”

The full extent of the damage is still unknown but the damage includes computers and electronic components in all three of the station’s studios.

Only one studio was operational as of Thursday, but component parts to repair the others have been ordered and will be installed as soon as possible.

WYSO General Manager Neenah Ellis said listener response was strong all during the week. “We’re so grateful for all the calls of support and good wishes. We’ll make these repairs as quickly as possible and put this behind us.”

“WYSO staff members are to be commended,” she said, “especially engineers Jim Stitt and Russ Hines – but also operations director Peter Hayes. To take two lightning strikes and to be back on the air in 46 hours is pretty remarkable,” she said.

Public Radio station 91.3 WYSO is licensed to Antioch University and operates on multiple platforms: FM, HD and on-line at www.wyso.org.

Photo 1 - A member of the tower crew climbing the 405 foot WYSO tower on Clifton Road south of Yellow Springs to begin installation of a temporary antenna. One of WYSO's antenna bays, and the fiberglass casing that covers it, was destroyed by a lightning strike on Monday, July 11. Photo taken by Glenn Watts on Wednesday, July 13.

Photo 2 - A member of the tower crew begins working to replace the WYSO antenna on the station’s 405 foot tower on Clifton Road south of Yellow Springs. One of WYSO's two antenna bays, and the fiberglass casing that covers it, was destroyed by a lightning strike on Monday, July 11. Photo taken by Glenn Watts on Wednesday, July 13.
Click on images to enlarge.
Posted by Virgil Hervey at 8:52 AM