The Backyard Flock: Why did the chicken cross the road? 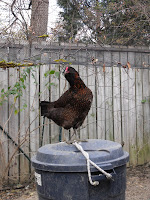 It was a Saturday afternoon last year. I was doing something in the house, probably sitting at my computer. Whatever it was, my reverie was disturbed by a knock at the door.

“Do you know anyone around here who keeps chickens,” the man at the door asked.

“I was riding my bike past your house, when a little orange colored chicken crossed in front of me and disappeared into the yard across the street.” His concern was evident in his voice.

For some reason I felt I had to reassure him, even though I was somewhat distressed at the prospect of spending the rest of the afternoon trying to capture a wayward chicken.

“The chicken crossed the road, eh?” I joked. “Thanks, we’ll get her. They always come home to roost.”

In this case, however, I was not so sure. This bantam pullet that someone had recently entrusted into my care was about as wild as they come. She and her sister had already led me on several chases. The problem was that they were small enough to squeeze through holes dug by other animals, mostly raccoons and groundhogs, under the fence around the chicken run.

Realizing that there were too many good hiding places in my neighbor’s yard, I conducted a perfunctory search and gave up after only five minutes or so. Then I drove around the block a couple times looking into people’s yards in case I might get lucky. She had already demonstrated her knack for hiding on several previous occasions. I would plug one hole and she would find another. When she would realize that I was on her trail, she would hunker down in a thicket, almost impossible to spot.

Usually, when one of our bigger, tamer girls slips out if the gate is left ajar, she can’t wait to get back in with the flock. If they can’t get back in, they will pace up and down the fence, looking longingly at their friends and crying. If I purposely let them out into the bigger yard, I can count on them going home when the sun sets.

The fear here was less that she wouldn’t return on her own when she got hungry or lonely, but that a dog, cat, hawk or raccoon would get her first. But, frankly, I was getting tired of chasing after this one. Either she comes back to the flock, or she doesn’t, I told my worried family. But every time I went somewhere in the car, I would make that extra trip around the block, just in case.

The next afternoon, Mike Kremer, who lives a couple houses down, knocked on my door to ask if I was missing a chicken. His dog had cornered her in his driveway. She had, indeed, returned to our side of the street. Was she trying to get home? Who knows..? We went over and retrieved her.

Among her previous escapes was one tragic event when she and her sister got into the yard behind ours. Whenever that would happen, I would worry that she would wander into the next yard where there is a large dog. After a long search I found her burried in a thicket and managed to grab her before she could untangle herself. I put her in a cage and set her out on an open lawn near where I had found her, hoping to lure her sister out of hiding. The sister was actually the wilder of the two.

Surprisingly, my trick worked. And even better, I had thought to leave the gate into my yard open, hoping to chase her back in there. That worked, too. When she saw me, she started to run and I was able to herd her through the gate. She was corralled, or so I thought. I closed the gate behind us and proceeded to go after her, hoping to corner her, but she got under my deck and fell into a ground hog hole next to the foundation of our house.

What had been a chase now became a rescue operation. Unfortunately, it ended badly. We could see her down in the hole, but we couldn’t get to her and we couldn’t lure her out. We should have left her to her own devices. She probably would have come out on her own. But, not being sure she could make it up the steep grade, we stuck with trying to get her out. She finally slipped down out of sight and was lost. We were afraid to dig for her, thinking we might just bury her. So we waited for her to come out. She never did.

Her sister, however, was still in the cage. We retrieved her and put her back in chicken land to escape again another day.

At this point you are probably wondering why it is that we didn’t just plug up all the holes under the fence. Believe me, we tried. But groundhogs are persistent. When they know there is cracked corn and chicken feed to be had, they will continue to go after it. No sooner do we plug one hole with bricks and paving stone, than they dig a new one, usually in a place where it is not easy to see.

The little orange escape artist finally came to a tragic end of her own. I would look out the kitchen window occasionally and see her atop the cherry netting I had strung over the chicken run to keep the hawks out. I could never figure out how she was getting up there. I assumed there was a hole I could not find and she was either flying up through it or climbing the shrubbery and somehow getting out. I would chase her off the netting into the yard and recapture her, knowing that she would do it again any time she pleased. I kept mending holes in the netting; she kept getting up there anyway.

One day, she and another small chicken disappeared. We searched all the neighbors’ yards. I found the little gray one dead in the yard of the neighbor with the dog. The dog wasn’t around, but the assumption was that he had killed her. But still no little orange chicken. Then I looked up and there she was, hanging from between two wooden slats in the fence between this yard and chicken land in my yard. She had apparently hung herself while trying to escape the dog.

Later it occurred to me how she had been getting on top of the netting. She had been going into the other yard, then, when she wanted to return to the flock, whether being chased by the dog or not, she would fly over the seven foot high fence and end up in the netting. So she was going home to roost after all. Unfortunately, this time she wasn’t quite able to clear the fence. She had been hoisted on her own petard.
Posted by Virgil Hervey at 10:17 AM

It's like having a flock of toddlers in the back yard. Their continued existence is putting Darwin's theory about the survival of the fittest on shaky ground indeed.

ah, poor little things. I enjoyed your writing and story of why chickens cross the road.

A chicken crossing the road is poultry in motion.