The Backyard Flock: Maintaining law and order in Chickenland 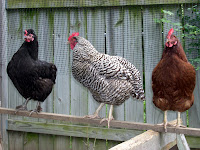 Sometimes I feel like the sheriff of the chicken run. Trouble is liable to break out at the drop of the hat. I have had to break up fights and smooth ruffled feathers more times than I can count. Chickens are the most selfish, jealous, heartless species I know of. It starts as soon as they are hatched.

Shortly after we got our most recent straight run of six day-old pullets home and under the heat lamp in a big plastic storage bin, we decided to have some fun with them. We dropped a little piece of white bread into the midst of our tiny flock. Immediately, one of them grabbed it and ran for a corner to get away from the rest of the chicks who were in hot pursuit. One of them grabbed the bread out of her mouth and headed off in the opposite direction with the flock after her. This game of keep away continued for several minutes until one of them finally managed to consume the last crumb.

Yesterday, I brought a plate of leftover ham scraps out to my flock of thirteen. The six little ones are full-size now and fully merged into the flock. At six months they are the youngest. At six years Pee Wee, my Rhode Island Red of “Rocky and Pee Wee” fame, is the oldest. As soon as they saw me leave the house with something in my hand, all thirteen gathered at the gate to the chicken run. I was barely inside, when Pee Wee jumped up, grabbed a piece of ham from the plate, and took off to get away from the others. Nothing has changed with maturity.

Chickens don’t share, unless there is more than they can manage to hoard. The hen at the top of the pecking order gets to eat first. Chickens that are newly merged into the flock are usually bullied for weeks. The older chickens will block the door of the coop at dusk in order to keep the little ones out. They only give up when it gets dark and they feel compelled to go in and get up on the roost. Sometimes when I go out to lock them up, I will find one or two of the younger ones roosting in a bush after having given up on trying to gain admission.

Many times, I have pulled one angry chicken off another in what closely resembled the schoolyard fights of my childhood at PS 97 in Queens. I have on occasion found chickens with bloodied combs as they sat laying and refusing to vacate the egg-laying box at the behest of an impatient sister. There are four almost identical egg boxes, but they always want to use the same one. At times I will go out to check for eggs and find the boxes turned over and all askew.

The chickens in the flock that were handled a lot when they were small are still tame. They like to be hand fed and picked up. But if I give too much attention to one, it sparks a reaction in the others who also crave attention. While holding one chicken and petting her and talking to her, I am liable to get pecked on the leg by a jealous sister. When I put her down again, I have to be careful to be sure she doesn’t come under attack. It’s like they want to teach anyone who gets too much attention a lesson not to do it again. They’ll treat her like a Mafia stoolie.

Right now everything is calm. This is probably the best-behaved flock I have had. The big ones have stopped picking on the little ones. I haven’t seen much pecking order enforcement. I think the weather has something to do with it. As selfish as they are, they cooperate when it gets cold, huddling together and sharing body heat. No one wants to be left out.

Every once in awhile, a chicken will go through a spell of bad behavior. Usually, this involves targeting another chicken and not letting up on her. At times like this I will give the repeat offender a timeout. That means getting kicked out of the chicken run. They hate being separated from the flock and will pace up and down along the fence line until I let them back in.

Even my most beloved pets in the flock have performed acts of unbelievable cruelty on their sisters. I’ll hear a cry from the back yard and look out the kitchen window only to spy my dear, sweet Pee Wee, who talks to me every morning when I let her out for the day, holding another chicken down with both feet and pulling out her feathers. This always pains me. Try as I might, I can’t get even the best of them to behave. No matter what I do, feathers will fly.
Posted by Virgil Hervey at 8:22 AM