Back Story: The Process

In the past, on the eve of production of one or another of my 10-minute plays, I have written about my awakening to the theatrical aspects of getting a play from paper to stage, from the fun we have had in rehearsals to how important it is for the writer to be part of at least the early rehearsals, so he can hear the actors try to spit out the mouthful he has left them with. Mostly, for everyone involved, it is a learning process. It starts all over again with each new play.

This year, for the first time, I am working with a bigger cast than my usual three. This involves a bit of choreography, especially when all the actors are on stage together. And, with more actors, comes more amazement and gratitude that I can get people to study, memorize and deliver my words. Sometimes I feel guilty for putting them through this; sometimes I wonder if I haven't duped them into thinking that we really have a play worth going through all this for. Maybe I'm not a writer at all, but just a salesman who has sold them a beaten up old jalopy, or, in this case, a bus.

But then it all comes together. Yesterday, after rehearsal, I observed to Walter Rhodes, the lead actor in this year's production, "From nothing, we have made something. It's amazing how that happens." The play has taken on a life of it's own. The actors get what it's about and pitch in with their own creative nuances to make it into something bigger than what was on those pieces of paper I handed them when we first started. Yesterday, I looked up from my script and was amazed at the animation taking place on the bench in front of Bill's Market. I am so grateful for them playing along until it reached this stage. Bravo, cast! I couldn't be happier with what you are doing. 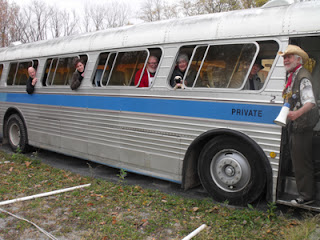