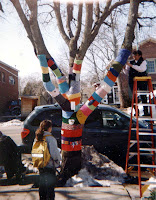 On Wednesday, as a YS Arts Council committee member, I spent the afternoon cleaning the gallery in preparation for our Third Friday Fling Opening Reception. While I was dusting the piano in the terrace (there for the playing wink wink) I noticed a blue envelope which had the words “Yellow Springs’ Artists” written on the front. Inside were six photos of the famous Yellow Springs Knit Knot Tree but no note inside the envelope or handwriting on the back of the photos. I recognized the time period as March 2008 when the tree was first…um….dressed. The knitting is brand new and the colors are bright. The knitted sleeves reached so high into the branches that contributors had to stand on a ladder in order to add more yarn. There are piles of snow on the sidewalk. The pictures were taken at the time that the Knit Knot tree was gaining coverage – first local, then national, then international fame – with photos and interviews with its creators Corrine Bayraktaroglu and Nancy Mellon.

I couldn’t tell whether the anonymous person who left the photos intended for them to be forwarded to Jafagirls (“Just Another Flippin’ Artist”) Nancy and Corrine or for YSAC. I took the photos home with me to scan them and get them into YSAC archives and then planned to forward them to the artists.

On Thursday I received the following mass e-mail from Corrine:

“Subject line: Knit graffiti trashed. Someone cut down the yarnbombing on the tree outside the senior center sometime last night and this morning and threw the knitting into the rubbish bin outside the front of the senior center and placed two crochet pieces into the free box. Which leads me to believe perhaps this is a local person.”

“I can’t speak for Nancy, but I consider it spiteful and cowardly that someone took it upon themselves to cut it down. I don’t care if they thought it looked shabby. Obviously they planned it since it requires a good pair of scissors to cut down such a large installation. Nancy and I have a reason for wanting to remove our own knit graffiti (and we were planning on removing this soon) as we try to reuse and recycle the knitting for other projects for charity fundraisers etc. (such as Tecumseh Land Trust, and the Knit Knot storytelling box) or return pieces others made. This particular yarnbombing was featured in a children’s book in Holland and we would have liked to have been able to take pics of it being taken down for our scrapbook. So as you can imagine I am peeved. If you know someone who is thinking the yarnbombing is looking shabby and they want it removed, please ask them to contact Nancy or I. We are more than happy to remove yarnbombing that is past its due date.”

The coincidental timing of the photos and the knit-knot-hatchet-job is certainly suspect but I’m not sure if there is a connection. I’m wondering if the yarnbombing-destroyer is misguided or misinformed and hasn’t been paying attention to the “life cycle” of textiles created by Nancy and Corrine. The two women have created and coordinated many colorful and clever public arts ideas involving many villagers (including me) since moving to town. The Jafagirls are all about community. Community is their middle name. Some of their ideas have been brief, one-time activities like Kiss in the Springs (2009) and others have been much more involved and on-going like their bench beautification efforts using yarn and felt, swapping out pieces after a few months time and redoing whole efforts when needed. When their work starts to look worn and ratty, like what happened to the Flower Power flowers attached to the railings at Brother Bears Coffeehouse, Nancy and Corrine remove the work.

As a new Jafagirl initiate and YSAC member, I am taken aback by this anti-art attack. Lucky for us, Corrine and Nancy are not new to this type of cowardly criticism. From experience I know they will come back even bolder and I look forward to their inspired response.

Whether it’s the harsh effects of an Ohio winter or a Draconian critique from an anonymous villager, Nancy and Corrine recognize that when creating public art, you can’t have an emotional attachment to the work or expect it to be up for any length of time. Afterall, knit happens.

Thanks, you two, for all the many ways you keep this town vibrant, unique, creative, and colorful and thank you especially for including me in your ideas.
Posted by Virgil Hervey at 9:03 AM

LOL, KNit Happens!!!!!!! love it, and thank you so much for the blog post susan, virgil.

And so true "you can’t have an emotional attachment to the work or expect it to be up for any length of time."

There is something very freeing about letting go :)

I would like to mention that I have witnessed these women taking down another public artist's work in broad daylight. They were asked why, and the reason was that they "didn't like it."

unless you can clarify who "these women" are? Or are you actually accusing nancy and I?

I like knitting!!!!And I appriciate how much work and effort you all have put in to them. Three cheers for the artist from me!

Anonymous:
I can't abide cowards that poke their 2 cents worth in and destroy gorgeous simple artwork, just to justify their opinionated existence!
Then complain and make accusations and not have the guts to give your name?
Might I suggest one? KNIT-WIT 101.

Corrine, girls, Virgil..
Im sorry some people are born mean. Im glad you are not and I hope you'll continue to love trees and give them ART to wear and be part of the community of Yellow Springs!! You are all loved!!

I would also like you to describe what you saw us taking down. Over the last years, we have taken down many of our own pieces or pieces that a group of people have done with us for a Jafagirl project. When it gets old we take it down. But I can't think of a time when we took down another artists work.

As a participant in the Yellow Springs yarn bombing, I am particularly outraged that someone would trash work that we have done. My hexagon flowers take about 2 hours each to make. Each one is unique. I have often seen visitors to our wonderful community seek them out and have photos taken in front of them. My second grade teacher used to say that if you didn't have the courage to sign something, you have no business writing it. Whomever is destroying our public show of love for our community needs to show him/herself and fess up. And stop!

As a participant in Yellow Springs yarn bombing, and the maker of the hexagon flowers, I am outraged that someone would destroy such a wonderful, joyful aspect of our creative community. It takes me 2 hours each to make my flowers and each one is unique. They should not be cut up and trashed--nor should any one elses's work.

My second grade teacher used to say that if you didn't have the guts to sign what you write, you have no business writing it. The yarn destroyer needs to fess up and stop telling lies.

I love the yarn bombers. I think they do a lot to put the town on the map. When I was in Thailand a few years ago, a young Thai woman told me that she had read about the knit knot tree. Why anybody would take down the work is beyond me, unless it is outright thievery. BTW, I don't interpret the anonymous comment to be an attack on Corrine and Nancy. I hope I am not wrong about that.

I agree virgil, if the comment wasn't directed towards us, then I hope they let us know what, who when and where and we can at least alert the everyone to keep an eye out.
Knit Happens :)