Post-Stutzman’s, Nick Ormes is still caring for the animals

Back in 2005, Nick Orme’s had to leave the farm where he was living in Beavercreek and find new digs. That would have been a problem for just about anyone. But for Nick, the hassle of having to move was exacerbated by the fact that he had to do something with all the ducks, chickens, guinea hens and geese people had surrendered to his care over the years. Fortunately, around that same time, someone told him that Gary Stutzman was also caring for owner-surrendered animals on his nursery property in Yellow Springs. Nick came up to take a look, and thus started a relationship that lasted for some three years.

“I could see that Gary needed help,” Ormes said in a recent interview. “There were problems with how the animals were being fed and in protecting them from predators. I asked him if he wanted help.”

Nick ended up moving his camper onto the nursery grounds and splitting his time between living on the property and in an apartment in Yellow Springs, so he could be up early in the morning to feed and water the animals. 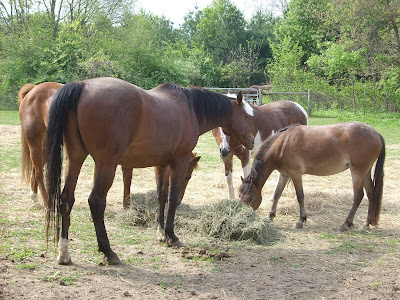 “The volunteers were only able to feed the animals on their own schedules, but they needed to be fed in the morning,” Ormes said.

Over the course of the next three years, Ormes worked as a full-time volunteer caring for the animals at the nursery and working to establish a nonprofit animal shelter, even as Stutzman’s personal problems brought the nursery business to a halt and necessitated his absence from the property for several months. When Stutzman returned last November, he was faced with an eviction notice from the Village of Yellow Springs, which owns the real estate, and most of the physical property had been attached with tax liens.

While he was gone, he’d had many of the animals removed from the property. When he returned, he took steps to evict Ormes and the rest of the animals that Ormes had been caring for at his own expense. Recently, Village Council gave Stutzman a 90-day extension on the eviction and he continues to do business there. There are still a few animals on the property.

Once again, Ormes found himself on the move, this time having to find temporary lodging for some 200 animals including rabbits, turtles, lizards, cats, dogs, chickens, ducks, geese, donkeys, horses, pigs, peacocks, goats, sheep, and a variety of exotic birds. Many of them are what he calls “special needs animals.”

“I had to find homes for everything from finches to horses,” Ormes said.

Fortunately, the organization he founded, The Ranch Menagerie Animal Sanctuary, which he is working to establish as a 501 (c) (3), was the recipient of a bequest that has allowed him to continue to purchase equipment, feed, and medical attention for the animals. He used the money to establish a fund at the Greene County Community Foundation to pay for the animals’ care.

Ormes was able, on short notice, to find like-minded folks who would take in the animals on a temporary basis. They are now spread around on family farms in Troy, Beavercreek, nearby Clark County, and Xenia. Every morning Ormes rises and makes the rounds, bringing food and other supplies to each of these places.

“Some people will not let us pay for food,” he said. 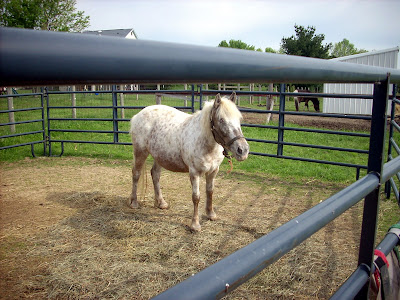 He is actively looking for a suitable location to establish his sanctuary. He would like to have it in Yellow Springs, but barring that, anywhere in Greene County, especially Miami Township where he can find between 20 and 100 acres would do, including the Stutzman’s property should it become available.

“100 acres would be ideal,” he said. “We could use some of the land to grow hay for our own use and to sell in order to be self –sustaining.”

Recently, I visited one of the places Ormes is keeping his animals, five acres with a couple barns in Greene County. The owners, Jerry and Susie have asked that I not reveal their full names or the location, because when people find out that they take in owner-surrendered and rescued animals, they will be flooded with requests and people might even abandon animals at their front gate. They have been taking in special needs animals for eight years. They have as much as they can handle right now. 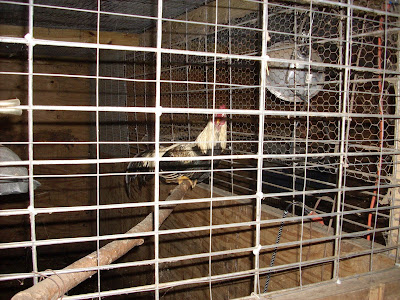 When I arrive, Ormes and the owners are waiting for a farrier to work on the hooves of a crippled, 25-year-old donkey called Molly who was brought here from Stutman’s. Molly has a bad knee and often lies down in her stall. She has trouble getting up without assistance and gets bedsores that require treatment. Her front hooves need to be trimmed to improve the way she plants them when she walks on her bad knee. She is at once rambunctious and friendly. 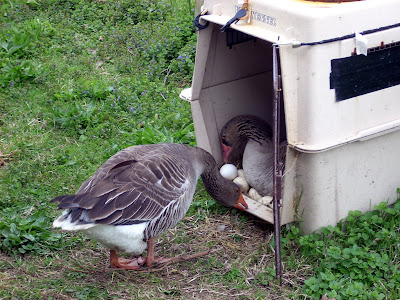 “We spent $700 out-of-pocket on Molly for the ferrier and shots,” Jerry tells me. “It costs about $2,000-a-year for a horse, plus problems.” He often worries about having enough hay to get through the winter.

While we wait, Susie leads a blind pony called Sugar from the barn to a fenced in area. When they got Sugar, she was pregnant. Her two-year-old colt is out behind the barn with a half-dozen horses grazing on a hay bale.

Alongside the barn are three geese I recognize from Stuzman’s. One of the females is sitting on a clutch of huge eggs in a converted animal carrier. A male is guarding her and screams at us as we approach. Chickens are running everywhere. According to Ormes, the geese had been adopted out, but they were returned because the people hadn’t realized how loud they could get. 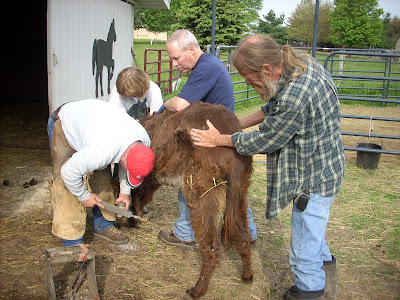 “Recognize that banty rooster?” Ormes asks as we tour one of the barns.

I do. It is one I gave to Ormes last year. We called it Henrietta until it grew a fancy tail and sharp spurs. After that it was Henry. When Henry started to crow, he had to go.


The farrier arrives. It takes three people to hold Molly as he works on her hooves. When he is done, her gait is noticeably improved. 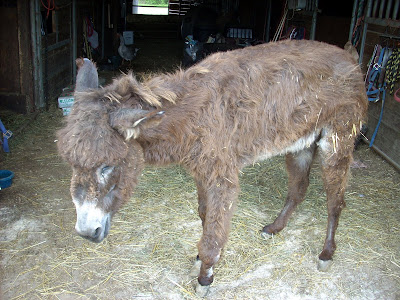 “She looks a lot better than the last time I was here,” the farrier says. “She is gaining weight.”

Nick, and Jerry and Susie are pleased.

The Ranch Menagerie Animal Sanctuary has a five-member board and twelve additional volunteers. You too can help a pigeon-toed duck that keeps tripping itself, a one-eyed rooster, a blind pony and a crippled donkey. Volunteers or those wishing to adopt can contact Nick Ormes at theranchmenagerie@yahoo.com. Tax deductible donations can be made to The Ranch Menagerie Animal Sanctuary Fund at the Greene County Community Foundation or to P.O. Box 123, Yellow Springs, OH 45387. For more information, visit http://www.theranchmenagerie.org/ on the Web.

I'm so glad Gary seems to be getting back on his feet. I know it must have been so hard for him to let the animals go, but the people who saved the nursery- thank you!!!