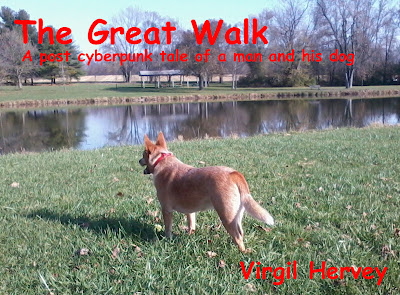 In the operating room at the animal clinic, an old man gently unstrapped a VR helmet from a dog that had just died and patted its head. The veterinarian’s assistant unhooked an IV, turned off a video monitor, and unzipped a new body bag.
“I wish I could do it again,” the man said to the vet.
She touched his hand. “You can – as often as you want. Take a copy of the VR recording with you. It’s a highlight reel of all the great walks you and Suki have had together over the last 13 years.” She handed him a VR helmet and a flash drive.
He wiped under his eyes with a dirty handkerchief.
“What do I do now?” he asked.
“Come back next week to pick up Suki’s urn.”
There was a flash of lightning as he started for the door, followed in a few seconds by a loud boom. He turned and looked back at the dog on the table.
“One last question,” he said. “Could she hear the thunder when she ran off from the field?”
“No, in the real world, your dog was deaf and almost blind. She was never aware of anything happening outside the dreamscape. She had a great time alone in the woods, looking for her lost Frisbee. That and the heeling were the parts of the experience she added on her own. And all those dogs… Dogs are great. They’re perfect for all their imperfections, all the heeling, hole-digging, barking at bicyclists, not-coming when called...”
“Yes, my dog was perfect,” he said.
The man drove home in the rain. He sat alone in his computer chair with the VR recording playing in the gear on his head and experienced the dreamscape, again. He would play it a thousand times over the next few years and, but for one occasion, it would be exactly the same each time. It always ended with his dog and him watching the sunset over the pond.

I put on my hat and sunglasses. The dog looks up from where she is sitting on the couch.
“Woof!” she says, and goes for her leash.
“That’s okay girl,” I say. “I don’t think we’re gonna need that today.
The doorbell rings and I go to the window and look out. It’s my son at the door. He is ten years old. He is wearing the plastic batting helmet with the Yankees logo I bought him at the stadium.
“It’s Matty!” I say.
Suki runs to the door. She is dancing around, her butt just inches off the floor. I open it and watch as my boy kneels down and pets my dog. He looks up at me and smiles. A feeling of unmitigated wellbeing and joy floods my senses.
“Hi, Dad,” he says. “Let’s go for a walk!”

Thanks, Michael. I especially hoped you would like it :).

Just catching up Virgil. Great story, I teared up and I am an old fat guy who usually isn't easily moved, but Suki looks so much like my Molly it is hard not to. Thanks for the good read. I would love to think that was going to be possible in the future. I have had four great loves in my life and one is my dog. Thanks again.

Well, like Toad Hall, I'm an old fat guy who isn't easily moved, but I have to admit, I was teary-eyed the whole time I wrote the first draft of this on a plane trip from Tampa to Dayton. The big dude sitting next to me on the first leg of the trip must have been wondering what was going on. I teared up for all subsequent drafts and still do whenever I read it. I have also received a number of emails regarding this story. One fellow sent his condolences. Fortunately, Suki is right here under my chair as I write this, alive and well, and as Ferlinghetti would say, a real, live, barking, existentialist dog. I hope to have many years to appreciate her.