Antioch College at the Herndon Gallery

Antioch College is pleased to announce the opening MEME: Culture in Transmission, a multimedia exhibition that invites investigation of the concept and the phenomenon of memes, considering their origin, evolution, mechanisms, and role in contemporary society. An opening reception for the exhibition will be held on Friday, November 30, at 7:00 p.m. in the Herndon Gallery in South Hall on the Antioch College campus.

The word “meme” originated as a term coined by evolutionary biologist Richard Dawkins in the 1976 book The Selfish Gene. Dawkins’ term derives its concept from the behavior of genes, which replicate from an organism to its offspring to ensure the duplication and transmission of genetic code. Similarly, Dawkins’ “meme” is defined as a “unit of cultural transmission,” such as an idea, tune, catch phrase, style, fashion, symbol, practice, etc. that spreads from one person to another through imitation. 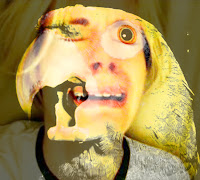 Since its introduction, there has been a great deal of scholarly study of the concept of memes. In the late 1990s, the term became used, and is now commonly known to define a style of internet-based image/text posting shared broadly on the web via blogs and social media. These Internet memes have proliferated as the influence of the Internet has grown.

What constitutes a meme? How do we observe the influence and evolution of memes? How do artists affect the transmission of their own ideas? Work in the exhibition explores archetypes, prevailing ethical mores, cultural icons, environments and institutions through a broad range of media including photography, sound, video, painting, sculpture, mixed media, and performance.

Visitors to the exhibition will encounter artwork ranging from Jeanne Philippe and Judith Huacuja’s “Unseen Rain” an installation that includes a deerskin canoe modeled after those made by Kutenai women in British Columbia, to Will Davis’s audio piece appropriating an impassioned YouTube plea to “Leave Britney Alone.”  Chris Shea and Charmaine Renee trace the path of phrases from Shakespeare to their usage in contemporary culture, while Glenna Jennings mines the National Cash Register archives to create images of laborers in her wallpaper piece called “Right To Work.”

Exhibition events also include a night of performance featuring Will Davis, Rodney Veal, and Free Shakespeare! on Thursday, January 24, at 7:00 p.m., and a community roundtable discussion on Thursday, February 7, at 7:00 p.m.

For more information, contact Dennie Eagleson, creative director of the Herndon Gallery at deagleson@antiochcollege.org or 937-768-6462.
Posted by Virgil Hervey at 9:47 AM