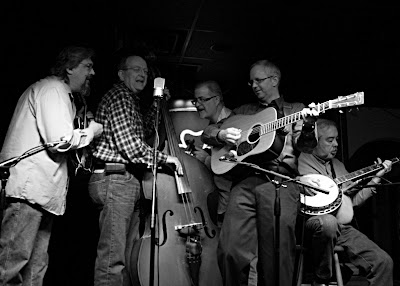 The Clifton Opera House opens its doors to a newly formed bluegrass band called the Kentucky String Quintet on Friday, June 17th.
The Kentucky String Quintet is a new bluegrass band comprised of veteran bluegrass performers headquartered in the central Ohio area. Drawing heavily on the sound and tradition of the pioneers of bluegrass music, the KSQ has forged its own unique style – a traditional voice for today. The band is comprised of seasoned veteran bluegrassers and they aim to please!

Dale Vanderpool: banjo. No stranger to fans of bluegrass, Dale has worked for years as a member of some of the finest bands in bluegrass music. Most recently, Dale performed as a member of Don Rigsby and Midnight Call – a stint that included the number 1 song in the country on the Bluegrass Unlimited chart. Dale has also been featured as a member of the Larry Stephenson Band, Rock County, Melvin Goins and Windy Mountain, Redwing and many other fine bluegrass groups. He has performed on the Grand Old Opry and internationally. In addition to his impressive banjo playing, Dale also contributes an occasional baritone or bass vocal to the band. Originally from eastern Kentucky, Dale makes his home in Harrisburg, Ohio.

Jeff Pursley: mandolin/tenor vocals. Since joining the groundbreaking bluegrass band Wheatstraw over 30 years ago, Jeff has been recognized throughout central Ohio and beyond as a top-notch tenor singer and mandolin player. He has performed with many bands and well-respected bluegrass artists over the years, including Summit Station, Tom Ewing and the All-American Boys, Tony Ellis, The Wirebenders and Frosty Morning. Jeff lives in Newark, Ohio.

Terry Mullins: guitar/lead and baritone vocals. No stranger to Ohio bluegrass fans in Ohio as a result of his years spent with Big Red and the Wagoneers, Terry handles the bulk of the lead vocal duties in the KSQ. Terry has performed with a who’s who of central Ohio bluegrass. He makes his home in West Jefferson, Ohio.

John Obora: fiddle/baritone and lead vocals. A versatile musician, John has not only played bluegrass with the likes of Summit Station, The Wirebenders and Tom Ewing; he’s also an experienced jazz and R&B guitarist, having performed at the Columbus Jazz & Ribs Fest and many other jazz festivals and clubs throughout the region. John handles most of the baritone vocals in the KSQ, along with a healthy bit of the lead vocal chores. He can also be seen playing fiddle with the Slate Ridge bluegrass band. John makes his home in Pataskala, Ohio.

Dan Cook: bass/lead vocals. Keeping the beat and providing some lead vocals, Dan is well known in central Ohio bluegrass circles, having performed with The Wirebenders, Sycamore Run, Mark Brinkman and many others. Dan lives in Columbus, Ohio.

The box office opens at 6:30pm, show starts at 7:30pm. The Clifton Opera House is A/C cooled and comfortable for the summer Americana series. Located at 5 So Clay Street in Clifton. COH is owned and operated by the Village of Clifton. For information call 937.342.2175.
Posted by Virgil Hervey at 8:53 AM