The Backyard Flock: Nothing beats a dirt bath to cure the winter doldrums 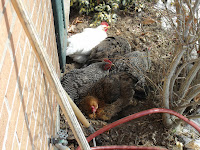 This past week, I posted a short video on the Blog of a half-dozen of my gals whooping it up with a good ole dirt bath. How was this possible with all the cold temperatures and snow that we have been enduring steadily for the past three weeks or so? It took a couple of big hearts and a lot of work. One of my neighbors wrote on my Facebook page, “Virgil, you have got the most lucky chickens in the world.” Yes, they are lucky, but they owe the dirt bath to the other half of this chicken loving duo. It was Amy who engineered the whole process. All winter long she has been staring out the back door at the snowed-in coops and murmuring, “Those poor things.”

It was last Sunday, Valentine’s Day. The sun was out in all its glory and the temperatures had soared almost to the freezing point. Our house faces southward and the front captures the heat from the sun and holds it remarkably well. This is a tremendous energy savings to us in the winter time and, as it turns out, a windfall for the chickens. The snow had melted away from the house and the front walk was clear and dry.

“Why don’t you let the chickens play out front?” Amy asked.

This is something we do a lot in summer. We open the side gate from the backyard and either carry a few of them out front to scratch in the flower garden or let them follow us out there. But this winter, the gate has been stuck shut in a couple feet of snow and ice.

“The only way to do it,” I told her, “is to carry them through the house.” I was sure this would be a deal-breaker.

“Okay, you wait in the house. I’ll bring them to you.”

So, one-by-one, she passed six of our twelve chickens to me and I carried them through the house and out to the front stoop. It was fun to watch them looking around at our digs as I brought them through the kitchen and the living room and out the front door.

Once outside again, it didn’t take long for them to find the bare stretch of dry, dusty earth next to the foundation that had been exposed by the beating sun. First they scratched around for bugs and ate the leaves off the bushes, and then they formed a big pile of writhing fowl covering themselves with dirt. After an hour or two we reversed the process and put them back in the coops.

How did we select the lucky vacationers? It was simply a matter of who volunteered. If a bird jumped up onto the bottom half of the Dutch door at the back of their coop when I opened it, she got to go. They made the decision for us. Half of them were brave enough to venture out. The other half were chicken.

Yesterday, with temperatures a few degrees above freezing, I decided to seize the moment and clean their coops. Since it is impossible to work in tight quarters with a bunch of chickens jumping around, I would have to let them out. So I enlisted my stepson for a reprise of the Valentine’s Day dirt bath. Only this time, the cast was slightly different. But, the results were the same – sheer joy!

After a good coop cleaning, they were returned to sanitary quarters and a bedding of fresh straw. This is something they never fully appreciate, however, because they love to get down and dirty.

Related post: A Valentine's Day Dirt Bath
Posted by Virgil Hervey at 10:08 AM