The Backyard Flock: The Hazards of Winter 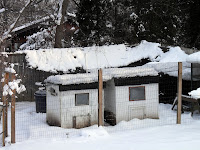 Last winter, the cherry netting we stretched over our chicken run to keep the hawks out survived several snowfalls without any damage, because the flakes were light enough to filter through without any appreciable build up. The almost 24 hours of heavy, wet snow we had one day this winter, however, finally exposed the weakness in our system. It built up to a weight that snapped the net’s central support and tore the entire span in half (see photo). It could have been worse. When we were finally able to get out there and inspect the damage, we found that it will be fairly easy to repair. We are just going to have to wait until the snow is gone.

Winter is not a fun time for chickens and those who care for them. I feel guilty every time I foil one of their attempts to escape the coop while I’m filling their feeders and changing their water.

Chickens have hot bodies. They will warm the coop with their body heat and breath. On all but the coldest mornings when I go out to bring them food and water, the water in their drinker is either not frozen at all, or just has a skim of surface ice. There are times, however, when I find the drinker frozen solid. It is extremely important to check the water at least twice a day, especially when it is below 20 degrees outdoors.

We currently have 12 chickens divided between two coops that were designed for six chickens each. They decided on their own that eight would stay in one and four in the other. That was okay for the short term. But, once it became apparent that they were going to be cooped up for weeks, I decided to relocate two of them to make for an even balance. I moved the two that seemed to want out the most. Boy, were they surprised when I took them out of the coop, only to put them into another. They thought they were getting to go out. But, they are better off with more room. And the four that were already in there probably appreciate the extra body heat.

Another thing to look out for in winter is frozen eggs. Eggs that are left in the coop overnight are particularly susceptible to freezing. We check for eggs whenever we check the water. Recently, when I went out to bring them water in the morning, I found an egg that must have been left over night. It was a green egg, frozen solid with a big crack in one side. If it had not been cracked, I would have defrosted it in a bowl of lukewarm water. Since it was likely to leak egg white, I decided to try frying it after just a few minutes of defrosting at room temperature. This worked out surprisingly well.

We have never had a chicken get frostbite, as we are careful to not have any metal objects around for them to roost on in winter. If we notice one that seems to be favoring one foot, we keep an extra eye on it, not that I am sure we would know what to do about it. We would probably bring her in the house. That is always our answer to a sick or injured chicken, although, it has not worked out too well in the past.

Fortunately for now, cabin fever seems to be our girls' biggest problem. Whenever one of us starts feeling bad for them, we remind ourselves about those chickens in the commercial egg laying operations. But, try telling them that!
Posted by Virgil Hervey at 11:46 AM