Bright colors for a dreary day 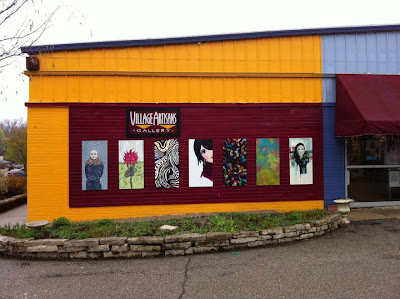 The original idea for the panels was to hang them in "Pub Alley," the alley between The Gulch and Super-Fly Comics. But a change in building ownership and unforeseeable complications forced Jafagirls Corrine Bayraktaroglu and Nancy Mellon to look for another location. Local contractor Les Gilford suggested the Village Artisans building and installed the panels. Nancy and Corrine are happily accepting donations, big or small, to help pay for more public artwork projects like this. They can be reached at Jafagirlart@yahoo.com.

Photo by Corrine Bayraktaroglu
Posted by Virgil Hervey at 9:59 AM

thanks for the shout out Susan, Virgil. I have to say Nancy and I are over the moon with how it turned out and thanks have to go to Les for suggesting the location and the building owner/Village Artisans for giving permission. Everyone's work is a visual feast on that corner.