Wine comes to the Little Art

Beginning December 17th, the Little Art Theatre in Yellow Springs will offer wine and beer for moviegoers. To celebrate this new addition to its menu, the Little Art will offer a free showing of Sideways, at 6:30 PM on Saturday-doors open at 5:30. Alexander Payne’s 2004 comedy/drama romance starring Paul Giamatti and Thomas Hayden Church is set in the lush valleys of California‘s wine country and serves as a perfect film to kick-off the new additions to their concession stand offerings.

During regular show times, the Little Art will offer red and white wine as well as several signature beers. In addition, the “Little Artini,” a signature cocktail, will be served during special events. 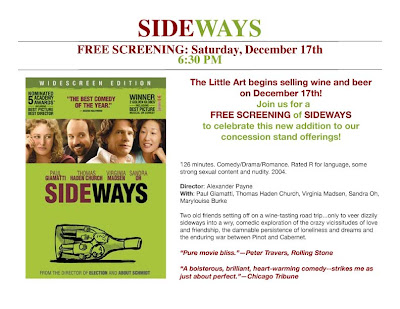 Click on image to enlarge.
Posted by Virgil Hervey at 8:49 AM