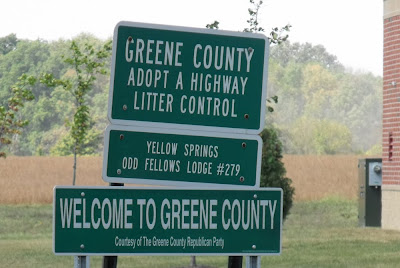 County Democratic Chair Don Hollister is quoted in the article as saying, “It’s got Marilyn Reid’s name on it. That’s enough,” when asked if he felt the signs injected politics onto the county's roadways.

Editor's note: The photo was added this afternoon to replace the one taken by DDN. It is of the sign referred to by the commenter. It is really odd that it is on Dayton-Yellow Springs Road by Antioch Midwest on the way out of town. The explanation might be that this is where the county road starts. However, one is left with the impression that Yellow Springs is not a part of Greene County. I'm sure some Republicans feel that way.
Posted by Virgil Hervey at 11:46 PM

Standard: Traffic control devices [sign] or their supports shall not bear any advertising message or any message that is not related to traffic control." (MUTCD, 2000 ed., Section 1A.01 Purpose of Traffic Control Devices).

Are the signs at the county line boundaries?

The sign on Dayton-Yellow Springs Road is placed near the edge, exiting the village. Very confusing since road user has not left Greene County.

Perhaps the Republican party should to buy a commercial bill board instead of confuse road users?