The Backyard Flock: Which came first, the chicken or the egg? 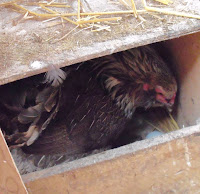 I have often noted in this column the odd behavior of the chickens in my flock with regard to a number of their habits and instincts. The strangest things they do, however, usually happen in conjunction with egg-laying. While this would seem to be a solitary activity, and in a way, of course, it is, it is also a sociological phenomenon that involves a number of group behaviors. Margaret Meade would have had a field day observing my flock.

It appears that an important consideration in chicken ovulation is where to do it. Most often, that turns out to be where others have done it. Awhile back, Nick Ormes, my chicken guru and former guardian of the animals at Stutzman’s Nursery, offered to bring me a broody hen that was sitting on a clutch of fertilized eggs. The idea was to let her hatch them out and I would keep the chicks and he would take his hen back. He was rather fond of this particular Old English hen. One day he was looking for his bucket and found her in it, sitting on a dozen eggs. Due to the difference in the sizes and shapes of the eggs, it was clear that they were not all hers.

If you want a chicken to lay in a certain place, the best way to convince her is to show her that another chicken thought it was a good place. I have used fake eggs, real eggs and hard-boiled eggs to trick them into laying where I wanted them to. People have even been known to use golf balls. My problem is that I have two coops with two egg-laying boxes in each and a dozen chickens that all want to lay in the same box. Sometimes the line is out the door. More often the competition for one box leads to some vicious squabbles.

But, chickens don’t always follow the path most traveled. Sometimes, when the squabbling gets too intense, they seek solitude outside the coop. Weather permitting, we find eggs outside when the fighting gets too much for some of the more sensitive girls. We will also find them in odd corners of the coops.

The thing that puzzles me the most is when there is a sudden change in preference for one egg box over another. We will go for weeks getting eggs out of one particular box, when, without any forewarning, we suddenly start finding them in another box. This just happened recently, when an older hen started laying after a long hiatus. Instead of following the group of pullets to their preferred egg box, she laid an egg in one of the boxes in her own coop. Chickens are a curious breed. They are always poking around to see what’s new. Apparently, they discovered her egg and decided if that box was good enough for her, it was good enough for them, too.

One of the ways they know when and where someone has laid is the announcement. Before and after a chicken lays, she will alert the rest of the flock about her activity by cackling loudly. When a whole bunch of them get going it is sometimes more than I can stand. While this would seem to be self –defeating, it probably served some purpose for their ancestors in the wild. If they all laid in the same place, it would take only one of them to sit on the eggs until they hatched. Another of my theories is that sharing a safe hiding place from predators would best serve the entire flock.

Sometimes we find an egg that has been broken. This is usually the result of an accident and happens most often when an egg has been laid outside of the egg box. Occasionally, it is the result of being pecked. Chickens will eat eggs, but this is rare. We do our best to discourage it.

More common is the case of the disappearing egg. A variety of predators such as skunks, raccoons, opossum and snakes will either take them or eat them on the spot. Recently, there were news reports of a snake that ate a golf ball that had been placed to encourage laying in a specific place. The snake required surgery.

Since I lock the coops at night, I doubt that nocturnal predators have been taking them. Most of them would prefer to go after the chickens, and there are rarely any eggs in our coops at night. I have never seen any sign of snakes in my backyard. But when an egg disappears completely without any trace of a broken shell or spilt yolk, a snake would seem to be the most likely suspect, since they swallow eggs whole.

And then there are snakes of the two-legged variety. After one of my neighbors passed away, I learned that he had been helping himself to my eggs and sharing them with another neighbor. I laughed when I heard about it and I certainly would not have minded if I had known about it at the time, because he was a good friend and loved my chickens as much as I do. He used to sneak in my yard and feed them wild birdseed. Sometimes I would give him a dozen eggs and more likely than not, I had told him to help himself and forgot about it.

Chickens may be funny when it comes to laying eggs. But sometimes, the people who love them are even funnier.
Posted by Virgil Hervey at 10:16 AM

duh every body knows the egg