The Clifton Opera House hosts the Ivory Doghouse on Saturday, August 11th at 7:30pm. They will be "Boogying the Blues" and rocking the house. 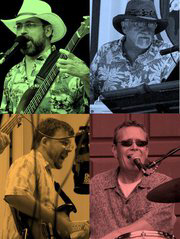