Christopher Buehlman to sign his latest book
Sept. 4 at Dino’s 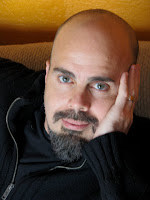 Author Christopher Buehlman will be in Yellow Springs to sign his horror novel Those Across the River at Dino’s Cappuccinos Patio on Tuesday, September 4, at 7:00 p.m.  Co-sponsored by Dark Star Books, Buehlman is a former Ohioan well-known from the Ren-Fest circuit.  A 2007 award-winner for his book of poetry, Buehlman’s first novel is up for Best Novel at the World Fantasy Awards, with competition both from Stephen King and George R.R. Martin.  Charlaine Harris says it is “One of the best first novels I’ve ever read” and reviewed it with Janet Evanovich on the Today Show as one of the must-reads of summer.
Posted by Virgil Hervey at 7:59 AM