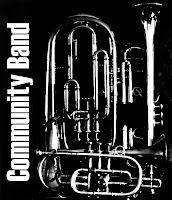 The Yellow Springs Community Band's next concert will be held on Friday, May 11 at 7:30 p.m. on the Mills Lawn School lawn. The band will perform American and English selections for concert band, including music by Elgar, Granger, Sousa, Grundman and selections from Harry Potter and the Beatles. Note: This is a change from an earlier post that said the concert would be indoors, which was a change from an even earlier post that said it would be outdoors. Maestro James Johnston has decided, due to the weather forecast, it would be nice to perform outside. If it rains, look in the gym. Better yet, just follow the sound of the brass players warming up.
Posted by Virgil Hervey at 11:23 AM