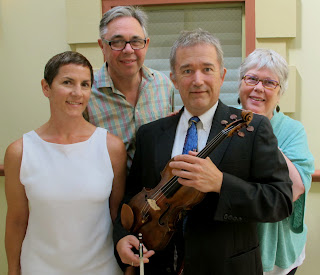 The nonprofit recital series Sunday at Central will present renowned French composer Olivier Messiaen’s Quatuor pour la fin du Temps (Quartet for the End of Time) on Friday, October 26 at 7:30 p.m. in the South Gym at Antioch College. The free hour-long concert is funded by the Johnstone Fund for New Music.

One of the most vital works of the 20th century, Quartet for the End of Time carries gripping messages of wartime hope and redemption that still resonate today. Messiaen composed most of the work while an inmate at the Stalag VIII A prisoner of war camp in Görlitz, Germany. Sympathetic guards gave Messiaen and his fellow prisoner musicians manuscript paper, pencils, instruments, and allowance to rehearse four hours a day. It premiered at the camp in January of 1941 for 400 prisoners, officers, and guards. The ethereal piece contains eight movements, each with its own distinct color and form, and is inspired by text from the Book of Revelation.

“If there’s one work that represents the indomitable spirit of humanity, this would be it,” said Sebastian Knowles, Sunday at Central trustee and Associate Dean for Faculty and Research (Arts & Humanities) at The Ohio State University. “To hear this piece is to be forever changed, and forever certain that art has a purpose in the world.”

A brief interactive talkback led by Knowles will follow the performance. This program is recommended for ages 9 and older. Antioch’s South Gym is located at One Morgan Place and free parking is available.

Further Reading
For the End of Time: The Story of the Messiaen Quartet by Rebecca Rischin (Associate Professor of Music, Ohio University) uncovers the riveting circumstances around which the quartet was born.

About Sunday at Central
Sunday at Central is a nonprofit chamber music recital series that was founded in 1994. It offers intimate, personalized traditional chamber music concerts with internationally recognized professional musicians. David Niwa (Assistant Concertmaster, The Columbus Symphony) is the organization’s Artistic Director. Its 2012-2013 recital series is funded in part by grants from the Greater Columbus Arts Council and Ohio Arts Council.

About The Johnstone Fund for New Music
Columbus community leaders Jack and Zoe Johnstone founded the Johnstone Fund for New Music in 2008. It supports the continuing growth and vitality of new music and aims to position Central Ohio as a powerful incubator of this inventive art form. In addition to offering grants to commission the creation and performance of new works, the Fund inspires collaboration between composers and musicians.
Posted by Virgil Hervey at 8:09 AM