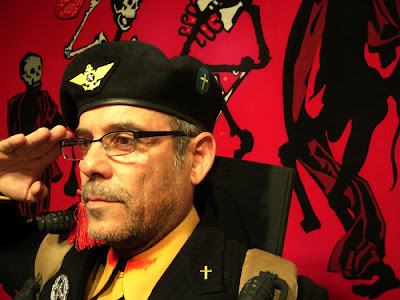 Nonstop Institute’s holiday Gala fundraiser on Saturday, December 18 starting at 7 PM will feature performances, music and artful cooking demos. Shuffle by actress/writer Louise Smith will present random contents of the performer’s psyche responding to a prescribed playlist with audience as director and witness. A performance that meditates on uniforms and uniformity by Cuban-born multimedia artist Juansi Gonzalez will feature elements from his America at Home installation and has been described as a “therapy of confrontation.” Dancer/Choreographer Jill Becker will perform Indictment, a tribute to Iraqi women who have lived for a generation with economic embargo and war. Artists/Chefs Michael Casselli (YS) & Raul Enriquez (NYC) will team up via skype to tempt the audience with Burrito Mambo, a mouth watering performance with a delicious payoff. And the experimental rock ensemble Kuan will perform. Donations requested.

http://nonstopinstitute.org/nonstop-presents/nonstop-gala-fundraiser/
Posted by Virgil Hervey at 9:54 AM