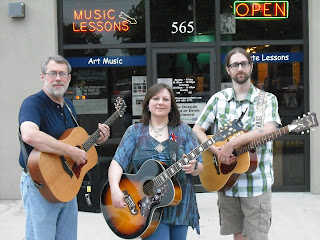 Serendipity is a very diverse multi-instrumental family group consisting of Dave Dill on Guitar, Vocals and Bass, Karianne Dill on Guitar, Vocals, Mandolin and Ukulele, and Mike Dill on Guitar, Vocals, Mandolin, Harmonica and assorted percussion. Dave has played in the Dayton area with many groups over the past thirty or so years, including John Stanley and Cotton, Lost Canyon Band and The Mainstreet Band, and most recently with Ralph Kettering and The Impossibles, and of course, Serendipity. Mike has played with Dave in Mainstreet, 3-speed, and as a duo since the mid-90’s, and Karianne has played with Mike and Dave for the last three years, as well as many studio appearances.

Their repertoire consists of material from the 1930’s to the latest hits, from pop standards to classic rock and country, folk, comedy and Americana. They cover a little bit of everything. Songs from The Beatles, Buddy Holly, Johnny Cash, Train, Simon and Garfunkel, John Prine, Heywood Banks, Ray Charles, Joni Mitchell and Bob Dylan. Above all, they like to have fun! You’ll be laughing, clapping hands, snapping fingers, singing along and tapping toes as you take a musical trip through the years with Serendipity!

Call 767-2343 for more information.  The Clifton Opera House is located at 5 So Clay Street, Clifton.

Posted by Virgil Hervey at 8:36 AM