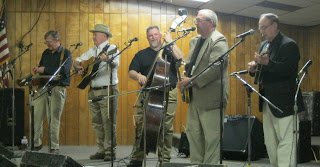 Black Diamond is coming to Clifton Opera House on Friday, May 11th. The show starts at 7:30pm, don't miss it! Black Diamond is an accomplished Ohio based bluegrass band, featuring one of a kind, tight harmony vocals, along with great picking and enthusiastic personalities. Formed in 1997 the band started out performing for private parties and events all over Ohio. Expanding out as a regional band the band has performed all over Ohio as well as traveling to surrounding states.

Black Diamond has many influences dating back to the founder of our music (Bill Monroe), original music written by members of the band, to the newest artists on the circut today. It has been said that the band is a real joy to watch perform and the comeradity among the members is evident. Black Diamond hosts their own indoor shows at the Maranatha Community Fellowship Center just south of Plain City Ohio. They have shared the stage with many of Ohio's premier bluegrass bands as well as national talent such as Dave Evans and River Bend, Don Rigsby and Midnight call, Missy Raines, The Tommy Webb Band, Summertown Road and many others. Their bassist, Greg Criner hostes bass workshops taught by artists such as Travis Book, Marshal Wilbourne, Missy Raines and others.

The Clifton Opera House is located at 5 So. Clay Street, Clifton. Suggested door donation $7.00
Posted by Virgil Hervey at 9:46 AM