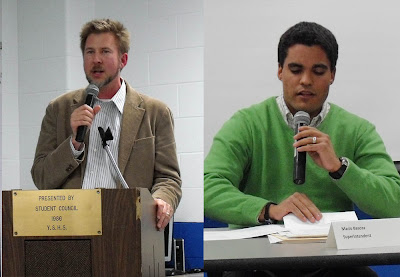 School Board President Sean Creighton (left) and Superintendent of Schools Mario Basora at last night's forum on school finances
"Nothing has been decided yet," Schools Superintendent Mario Basora told a crowd of about 50 concerned community members at a forum on budget cuts for the next school year, last night at YSHS . He assured those in attendance that their input would be taken into consideration and stressed that "we are all working together to save our schools."

"Work on the 'Reduction in Force Plan' starts tomorrow," he said.

The meeting was moderated by School Board President Sean Creighton. After making presentations, a panel of four, composed of Basora, Schools Treasurer Dawn Weller, OAPSE President Nancy Bussey, and YSEA President Vickie Hitchcock, fielded questions and comments from the audience.

Basora preceded the Q&A session with the results of his meetings over the past few weeks with community members and staff. He stressed that there would probably have to be staff reductions of between two and five positions and hoped that most of them could be accomplished through retirement. Other areas where cuts could be made are the percentage of health insurance paid by the schools, classroom budgets, and eliminating step increases.

Suggestions from the community included cuts in busing, improved buying power through joining consortiums, and online courses for AP students. Tops among the things to keep were music, AP courses, arts, small class sizes, and services from the Greene County Educational Service Center.

The school board will be presented with the plan at its March meeting, Basora said.
Posted by Virgil Hervey at 10:04 AM