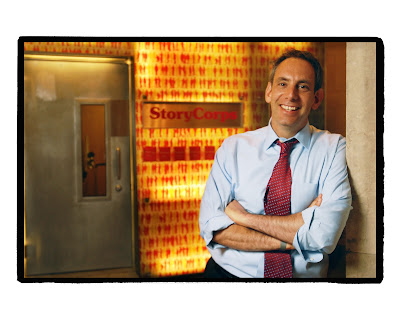 WYSO Public Radio will host Dave Isay, the founder of StoryCorps, at a public event on Friday June 21. Isay will speak at 8:00pm at the Mathile Theatre in the Schuster Center for the Performing Arts. His presentation is called The History of StoryCorps and the Power of Listening. The event is a fundraiser for WYSO intended to support its Community Voices training project

StoryCorps is a national oral history collection project in which regular citizens are given the chance to interview each other and record their stories. Segments of these stories air each Friday during NPR’s Morning Edition, which airs on WYSO 91.3 FM Monday-Friday, 5-9am.

WYSO hosted StoryCorps on a month-long visit to Dayton in 2010. About two hundred individuals recorded interviews during that time. Twenty five of them aired on WYSO in 2010-2011 as “Miami Valley StoryCorps.”

Dave Isay is the recipient of numerous broadcasting awards including the MacArthur “Genius” Fellowship, four Peabody Awards, and two Robert F. Kennedy Journalism Awards. He’s the author of four books that came out of his experience as a public radio documentary work, including New York Times bestsellers, Listening is an Act of Love and Mom: A Celebration of Mothers From StoryCorps, and All There Is: Love Stories from StoryCorps.

WYSO General Manager Neenah Ellis says, “Dave Isay is one of the great radio producers of our time. Much like one of his heroes, Studs Terkel, he sees his work as collecting the wisdom of humanity. He’s a committed visionary. I know WYSO listeners will love meeting him and hearing his thoughts about the importance and power of listening.”

Isay founded StoryCorps in 2003. To date, it has collected and archived more than 45,000 interviews from more than 90,000 participants. It is one of the largest oral history projects of its kind. In 2007 it was awarded a rare institutional Peabody Award and again for its coverage of the 10th anniversary of September 11th. Most recently StoryCorps won a 2013 MacArthur Award for Creative and Effective Institutions.
Posted by Virgil Hervey at 9:26 AM