Concert to benefit the Senior Center 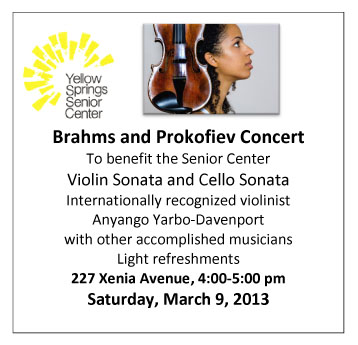 Please come enjoy this fundraiser concert for the Senior Center, suggested donation is $10, however any amount is welcome. The program is about fifty minutes long, allowing plenty of time for those who plan to attend the wonderful Friends Care Progressive Dinner at 6:00 pm.

Winner of the 2011 Presser Music Award for Artistic and Academic Excellence, violinist Anyango Yarbo-Davenport has been praised by international critics for her “captivating performance” and “sparkling rich” sound. Born in Munich, Germany, she has appeared twice at Carnegie Hall in 2010 and was the winner of the “Most Distinguished Violinist Award” and the “Special Mention Award as Composer” for her composition 'In Memoriam of My Father’ from the 2010 IBLA Foundation World Competition in Italy, performing on the foundation’s Stradivarius violin at the Winner’s Gala. Currently she is a sabbatical replacement Professor of Violin, Viola and Chamber Music at Marshall University and first violin of Quatuor Mahogany, 2012/13 Quartet-in-Residence of Ensemble du Monde. www.anyangomusic.com

Vicki Hamm, B.M., Baldwin-Wallace College, currently teaches cello and performs in the Greater Cleveland area. She has been awarded scholarships and performance opportunities by the Tuesday Musical Association of Akron, OH and the Three Arts Club of Lakewood, OH. Vicki has been principal cellist under Gerard Schwarz at the Eastern Music Festival (2010) and the l)a Contemporary Ensemble (2008-2011), and currently performs with the Cleveland Philharmonic Orchestra.

Pianist Sam Reich is actively performing solo and chamber music in the United States, Europe and South America. Recent performances from 2011-2012 include concerts for the Ohio Arts Council, the Summit Music Series, the Bogota International Piano Festival, the International Women in Music Festival, and the Eastman Messiaen Festival. Dedicated to New Music, Mr. Reich premiers new works by composers every year, and has been featured at The Stone Music Space in New York playing music by young emerging composers. Mr. Reich is a graduate of Eastman School of Music where he served as a Teaching Assistant and Accompanist, as well as at the Interlochen Arts Festival in Michigan. He has participated in master classes with Yoshi Nagai and Daniel Pollack. His teachers include T. J. Lymenstull, Jean Barr, Barry Snyder, Thomas Schumacher, and Enrico Elisi.
Posted by Virgil Hervey at 11:08 AM