Back Story: A touch of pathos 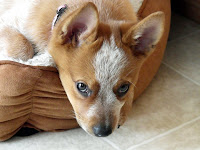 We had an appointment scheduled with the vet, yesterday, for the dog to get her latest round of shots. On Saturday, the pup came up a bit lame in her right rear leg. It was hardly perceptible at first, but with careful scrutiny, we came to the conclusion that it was so. She had been playing hard at Frisbee and there was still quite a bit of ice and snow in the backyard, so we figured she might have pulled or strained something.

Even though she continued to favor that leg, at times she appeared to walk normally. And running was no problem. I palpated every part of her leg and she showed no signs of pain. In the afternoon she played more Frisbee and, on Sunday, she was dropped off at cousin dog's house to be babysat for five or six hours while we went to Columbus. The two dogs mud-wrestled in our daughter's backyard most of the time we were gone. That evening, after a long nap, the pooch was limping pretty badly. Fortunately, we had that appointment with the vet already set up.

On Monday, she seemed to be walking pretty good. I had to look real hard to see that there was still something wrong. That afternoon, I mentioned it to Dr. Tina and she had me walk Suki for her. I couldn't see anything, but she picked up on it right away. She felt all over her leg, as I had, and thought she felt something on the knee. X-rays showed nothing unusual.

"No Frisbee, no running, no up or down steps for three weeks," the doctor said.

The timing couldn't be worse. After being cooped up all winter and virtually all her life, the poor dog was just learning the joys of Frisbee and starting to brave going down the flight of stairs from our deck to the backyard in the recent spate of good weather.

To complicate matters, she is scheduled for her spaying procedure in four weeks, after which she will be required to wear one of those special collars for 11-14 days to keep her from licking her stitches.

She went out to take care of the chickens with me this morning. Not running was not an option. Now, she is limping again. Poor, pathetic pooch!
Posted by Virgil Hervey at 11:29 AM

I hope playing with Midas today didn't aggravate her condition. Midas must have enjoyed the visit because he is completely zonked out right now.

They were actually pretty relaxed once they were off-leash and inside the fence together. It was a good visit and I think they will be friends. She is limping a bit today after running around in our backyard this morning. I'll have to be more careful.