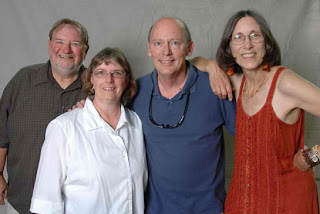 Come to the Clifton Opera House on Friday night and find out for yourself! What does a band named after a sailboat sound like? Whinestopper, a Columbus, Ohio-based quartet, is made up of a group of musicians who intentionally defy being labeled.

Though influenced by numerous genres of American music, Whinestopper has managed to dodge being categorized as playing only one type of music. There are swing tunes, standards from the 1930s and 1940s, haunting folk ballads, up-tempo hard-driving tunes that come perilously close to rock ’n roll, and more…all on the playlist.

Here’s the bottom line: these kids just want to have fun, and very little is off limits when it comes to picking material. The members of Whinestopper have all been playing music since an early age, and appreciate the joy music brings to them and to others.

So whether Charlie Flowers is singing and finger-picking his way through a classic like "Ain't Misbehavin'," or Teresa Schleifer and bassist Renilda Marshall are singing a haunting folk duet, chances are that the audience will be smiling and singing along. The band also includes Pat Casey on vocals, accordion, and occasional percussion…if he remembers to bring his drum.