We've got two dogs this week. We are dog sitting cousin dog Rhesus while our daughter is away to Chicago on a short vacation. We used to love to babysit her dog, before we got one of our own. But, in our small house, living with two dogs can get to be a little intense. Fortunately, we have a fenced-in backyard.

Yesterday, midsummer-like temps on the very first day of summer forced me to keep the dogs inside most of the afternoon. The "in-and-out" of the morning eventually became "mostly-in" as the intense sun drove the thermometer past the 90 degree mark. It was, as they say, a "dog day afternoon." The dogs were playing the role perfectly, laying around the house, while I pecked away at the laptop I had stationed at one end of the dining room table.

Suki is the most likely one to bark if she picks up a sound or something catches her eye. She is the consummate watchdog. Rhesus is way too laid-back for that job. If something gets his attention, his tail picks up its pace (it's always going) and he gets an amused look on his face as he gets up to see what's going down. So, I was a bit surprised when he ran to the sliding glass door that opens onto our back deck and started barking. Suki, of course, joined him and the bark-a-thon began. When both dogs ran to get me, I knew it was time for me to take a look.

What concerned them were two large deer grazing on the other side of the fence in my neighbor's backyard. Deer are so ubiquitous in Yellow Springs, especially in the gardens of the south end of town, that Suki wouldn't normally bark at them. We see them every evening on our pre-bedtime walk. The deer have become so tame that even the sight of a dog will not spook them. The only time prior to this that Suki ever barked at a deer was when one was blocking the sidewalk on Allen Street and it wouldn't get out of our way. 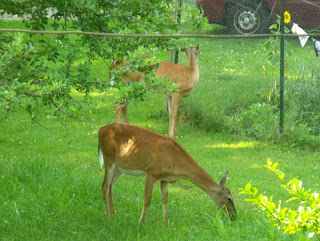 I watched the deer as they harmlessly grazed on grass that was due for a mowing soon anyway. Then they moved on to have a look at my neighbor's garden, but were deterred by the fence she had wisely put up around it. Next, they nibbled on some berries she had planted outside of the fence, then moved up to a flower bed she has alongside her house.

I love deer. But, I know that not everyone has the same affection for them that I do. I am not a gardener. Hence, my slowness to take action. Some gardeners call them "rats on stilts." I am a city boy. My neighbor is a country girl. Suddenly it occurred to me that she may not share my fondness for Bambi. So, I gave her a call.

"Sharon, there are some deer eating your garden," I said when she picked up.

"Oh, my goodness," she said, dropping the phone and heading out her front door, which put her right on top of the deer.

I could see her shooing them away as I watched from my back door. She headed for our mutual fence when she was done. I tried to keep the dogs in the house as I slid open the door to go out onto the deck to talk to her. I knew if I let them out, the barking would be so loud we wouldn't be able to hear each other. They managed to slip by me anyway, so I went to the gate to go out to talk to her away from the dogs. I managed to keep them in the yard as I closed the gate behind me and went out to assess the damage with my neighbor.

We were walking around her yard, talking, when suddenly here came the dogs. I had failed to latch the gate properly and, even though it is quite heavy and a snug fit, they had managed to push it open. Now, they were running around Sharon's yard like a couple lunatics. First, they ran up her driveway toward Xenia Avenue where the deer had gone, with me screaming for them to come back. Then they turned and headed back to us, but suddenly veered off down the easement toward Allen Street, more screaming and another retreat. When they returned, Rhesus jumped up on Sharon and she grabbed his collar. Suki sought out and found a spot where the deer had stood and started rolling around on her back. I was able to grab her.

A word of explanation here: Sharon recently broke a couple fingers on her right (dominant) hand when she tripped and fell on an uneven sidewalk. She is a fine artist who is also self-employed, part-time to support herself. She has been unable to pursue her craft or do her work since then. At the time of her accident, a few weeks ago, someone described her on Facebook as "elderly." Sharon is a couple years older than I. I wouldn't exactly describe her in those terms. However, if I had remembered her recently acquired frailty, I never would have called her to shoo away the deer; I would have done it myself. But in the excitement, I simply forgot that she was operating with one hand in a cast.

Once I had grabbed Suki, I turned to see how Sharon was doing with Rhesus. She was on her back in the ground, her eyeglasses askew on her forehead and her cast held high in the air. Rhesus had pulled her down and gotten loose again. I couldn't tell if she was laughing or crying. I managed to get the dogs back in my yard, making sure the gate was latched this time. Then, I helped Sharon up and we checked to see if anything was broken.

Fortunately, she had been able to protect her right hand. She was somewhat sore on her left side. But she explained that she had been having soreness on the left side of her body anyway, as she was unaccustomed to doing everything with her left hand. We chatted awhile, and I helped her cover her flowers with plastic netting.

As I walked back to my yard, I began to realize that this commotion could not have gone unnoticed by our other neighbors, especially since I had been screaming "Rhesus" and "Suki" at the top of my lungs. It must have been quite a show.

I have often said that I would not camp out in my backyard. I have been out there late at night with a flashlight and seen the skunks, opossum and raccoons. Before we got the dog, we were plagued with groundhogs. This morning, Amy called to me to look out the window.

"There's bear in the yard across the street," she said.

By the time I got there, whatever it was she had seen was gone.

Now, she's demanding a written apology. I know this won't satisfy her, but here it is: I apologize for accusing you of seeing things. Yes, there was a large bear in the neighbor's yard. The dogs and I will look for it later today.

Sorry I missed all the excitement!

As you can see from the photo, they were eyeballing your garden, too.